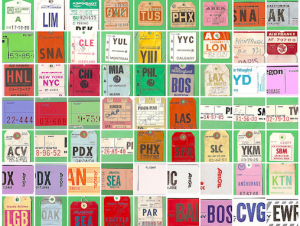 Unsure of the airport code for your next destination? Wondering why Orlando's airport code is MCO or Kansas City's is MCI. Be careful not to confuse the two or your Disney-bound family may have to settle for barbecue instead.

What's the story behind these three letter codes? Well, they are decided by the International Air Transport Association (IATA) to simplify and standardize the network of airports across the globe.

Some are easy to decipher, as they use the first three letters of the city or a combination of letters are an obvious abbreviation (such as OAK for Oakland). Others refer to the airport's official name like JFK for New York's John F. Kennedy International, originally known as Idlewild; CDG for Paris' Charles de Gaulle International. Some are less obvious, such as MCO for Orlando International Airport, formerly known as McCoy Air Force Base. Kansas City's MCI comes from its originally intended name of Mid-Continent International Airport.

Cincinnati's, CVG, which refers to its geographical location in Covington, Kentucky (just across the state line from downtown Cincinnati) and Maui's Kahului International Airport's OGG code named for aviator Captain Bertram Hogg, become clear only to those who dig a bit deeper to discover the origins of the code.

Airportcodes.org is a handy site to find any airport's three letter code.

This all makes for fun trivia, but it also confuses people when making airline reservations. What if you're trying to book a ticket and want to check fares to a city that has more than one airport, such as Chicago or the New York City area? Some web sites allow you to search an entire metro area with one abbreviated code, but others make you check airport by airport if there is more than one in that area. To make your search easier, there is a set of universally recognized identifying codes used to refer to an entire airfare market with one search. These are not official IATA codes and are not used by airlines, but can help you when looking for the cheapest ticket to your destination.

Here's a list of the most commonly used codes. Not all web sites accept them, but those that do (like Orbitz and ITA Software) make the travel booking process a lot easier. Try them out for yourself…you may just find a cheaper fare with a combination of airports than you might have otherwise.

Each code searches all of the metro airports in that area. Remember that not all web sites accept these codes, but it can make the airline booking process a lot easier when you start with these comprehensive codes.