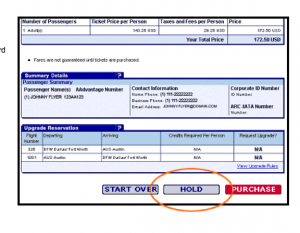 Need to change a flight booked in error or want to put a fare on hold for a bit? Here's how

Ever see an amazing fare on Airfarewatchdog.com, but you had to call your husband/wife/brother/posse to coordinate plans? Or just want to shop around for a bit to make sure it's a good deal? Sure you have. And while you waited, that $312 round-trip tax-included fare to Berlin  suddenly jumped back up to $1000. Or perhaps you hit the wrong button and booked the wrong dates or even the wrong destination. Are you stuck with that boo boo fare? Good news. Many airlines allow you to hold a fare, or if you change your mind, cancel and get a full refund or amend your booking if you chose Venice Beach instead of Venice, Italy, within 24 hours of booking.

Slight variations exist among the major legacy carriers, and keep in mind that whatever the official rules, exceptions can always be made if you plead nicely. Continental, American, United and Delta make it easy to cancel or change fee-free via their websites. Other airlines require that you make a phone call, which might incur a booking-by-phone fee.

Virgin America states in its contract of carriage that they "are pleased to hold your itinerary for 24 hours when booking through our Call Center. If you purchase a ticket and need to cancel within 24 hours of the original purchase, a full refund will be provided in your original form of payment" (which suggests that this amenity isn’t available if the reservation is made online).

JetBlue doesn’t allow fee-free changes or fare-holds at all, but there's a good explanation:  they are the only airline that doesn't overbook flights, and allowing consumers to hold reservations they might not use would mess up that business model.

Air Tran only allows changes within a four-hour window, and any refund comes in the form of a travel voucher.

American’s "hold" feature, unlike most of its competitors, doesn't require that you pay for the fare in order to hold it, but as AA.com explains, "Actual 'Hold' period depends on fare rules. Some fares require purchase by a specific time."

Like American, Frontier Airlines will hold reservation made by telephone and the associated fare for 24 hours without payment "as long as the rules of the fare are met" (in other words, if the fare requires a seven-day advance purchase and you hold it for a day and now have only a six-day advance purchase window, you're out of luck).

Continental has also recently launched a service called FareLock allowing you to lock in your fare for 3 days for as little as $5 or 7 days for $9. This goes above and beyond their 24-hour cancellation policy, which remains in place for free.

Alaska Airlines used to allow fare holds without payment, but that policy changed effective May 12, 2010. Now you can you hold only after paying, and change your reservation at the original fare once during the 24-hour period, or get a full refund.

Southwest Airlines is a different animal altogether. They do offer a 24-hour fare hold, according to their latest customer service commitment document (last updated July, 2010), but only on reservations made by telephone (which may be an issue, since some of their lowest fares are labeled "internet only"). But you can always change a Southwest reservation any time before your flight and get a credit good for a future flight. You can even re-bank your fare payment and have the ticket re-issued in another person's name (although this policy may be changed), all without a fee.

If you've bought from an online travel site such as Expedia or Priceline, you'll have to be even more patient. Recently, we received an email from a reader about her experience trying to cancel a ticket booked on Priceline, and in short she wasn't able to reach a representative in time and was stuck with a ticket she no longer needed. Under Priceline's rules, if you phone them by 11:30 p.m. Eastern on the day that you book, you can get a full refund. But as our reader discovered, it's easier said than done. If you can't get through by phone, send them an email (which records the time it was sent) or better yet you might have luck calling the airline directly to see if they can do anything. However, this policy doesn't apply to "name your own" price (bidding for travel) Priceline fares, which cannot be changed or cancelled.

Orbitz offers a 24-hour courtesy cancellation on certain reservations, which can be processed online. Exclusions are package deals, paper tickets, and "certain airlines". Typically, a courtesy cancel button will appear at the end of the booking process if the reservation qualifies.

Check out our handy chart showing the cancellation refund policies for some major U.S.-based carriers and online travel agencies.