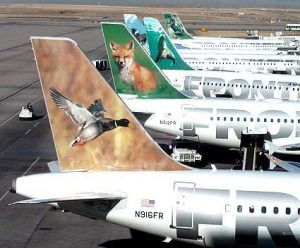 Frontier Airlines lowers some of its fees

Frontier Airlines has made some changes to the fees it charges customers for various services, for tickets purchased after April 13, 2011.

Most significantly, it has reduced the ticket change fee on its lowest "Economy" fares from $100 to $50, which is among the lowest in the industry (although competitor Southwest Airlines doesn't charge of this service).

It has added a $5 discount on the fee for the first checked bag charged on "Economy" fares,  if booked online. Frontier continues to sell more expensive "Classic" and "Classic Plus" fares which allow two free checked bags (read more about Frontier's fare types).

If you travel with a bicycle, you might want to consider Frontier next time. Rather than charging an extra fee for bikes, Frontier now lets you include a bike as a regular checked bag.

In addition, Frontier allows you to change the name on a ticket so that if you can't use it, you can let someone else use it. Previously, according to Frontier's website, the fee for this service was $50 on Economy fares, $25 on Classic fares, and $0 on Classic Plus fares (it continues to be free for "Summit" level frequent flyers traveling on any fare). Now it appears that name changes will cost $50 on Classic fares and fees on other classes of fares remain the same. Passengers must pay the difference, if any, however, between the time the ticket was purchased and the then-current fare when the change is made. (On Southwest Airlines, incidentally, you can effect a name change by cancelling your current reservation, getting a flight credit, and rebooking the ticket in someone else's name, although, again, you'll have to pay any fare difference if the fare has increased between the time you bought the original ticket and the time you requested the new one in a different name; all other airlines do not permit name changes).