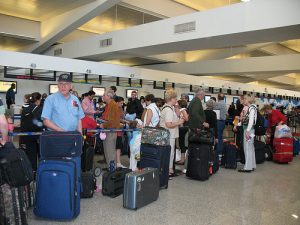 Without much fanfare, not surprisingly, many US-based airlines have increased checked bag fees, and in some cases no longer accept checked bags weighing over 70 pounds on international routes, meaning that any extra-heavy possessions can only be shipped by cargo, which is even more expensive.

Some of the fee changes are relatively small, others not so small. Among them:

United now charges $30 for a second checked bag for travel to/fom the US/Canada and South/Central America (the second bag was previously free for tickets bought before February 10, 2011).

United has increased some fees for overweight or oversized bags checked between the U.S. and Europe from $200 to $400 each way.

JetBlue increased its second bag fee from $30 to $35 (when JetBlue first initiated this checked bag fee, it was $20)

US Airways also increased fees last month. Bags weighing over 50 lbs. went from $70 each way to $90, and oversized bags (measuring over 62 inches in total dimensions) increased from a previous $100 per bag each way to $175.

American, Delta, and Continental no longer accept checked bags weighing over 70 lbs on some (mostly international) routes. They can be shipped as cargo at prevailing rates.

A current list of bag fees for U.S.-based carriers can be found here.