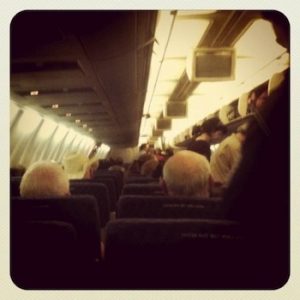 Bring a Book: Five Tales of Terror on the Tarmac

EVER been stuck on an airplane that just won't take off – or worse, you land, and they just can't find you a gate? Last week's episode of '30 Rock' reminded us just how frustrating the experience can be. (You saw it, maybe? The one where Liz Lemon's pilot boyfriend Matt Damon keeps saying it's a half-hour to takeoff, except it's not?) While new rules that went into effect last year ensure that passengers on domestic airlines never have to wait more than three hours, turns out, there's still plenty amount of room for improvement. Here, five epic tales of "terror" on the Tarmac  that'll make whatever hassles you endure on your next flight seem like, well, peanuts.

When Cathay Pacific Airways Flight 888 took off from Vancouver on a late December afternoon last year, the pilots had every reason to believe that it would be able to land without hassle at New York's JFK, even though the airport was still digging out from one of the worst winter storms in recent history. They were correct – the landing was problem free. After that, things went downhill fast. With immigration officials gone for the night – the flight landed much later than usual, after 2:00 in the morning – and gates all booked up with planes that weren't going anywhere, pilots had no choice but to wait. And wait. And wait. For 11 hours. A spokesperson for the airline later apologized, saying they'd have to look into what went wrong. Sounds like a great idea to us.

If you wonder just how things could have gotten so screwed up at JFK that a flight might have to wait for nearly half a day to get to its gate, back up the clock 48 hours from the time of the Cathay Pacific debacle and you'll find yourself right in the middle of yet another major-league nightmare: The one suffered by passengers on Virgin Atlantic  Flight 004, which Virgin inexplicably refused to cancel, even as one of the biggest storms in recent memory was bearing down on New York City, and just about every other flight – including others on Virgin's normal schedule – had been tabled. With the airline refusing to reschedule skittish passengers without subjecting them to hefty change fees, many showed up, hoping for the best. They got on the plane alright, but that's as good as it got. After hours onboard, they were released back into the terminal, by now shut off from the world due to the full-scale blizzard raging outside. Start to finish, the whole ordeal lasted more than 30 hours. Yikes!

THE WAIT HEARD AROUND THE WORLD

It was supposed to be a Valentine's Day to remember for passengers jetting out of frigid New York, on down to sunny Aruba. But passengers on that JetBlue flight out of JFK were instead treated to an 11-hour wait on the tarmac – the worst of nearly ten epic delays that day, all on JetBlue aircraft. Even the airline couldn't explain what happened, telling the press there was no excuse for how poorly things were handled. Passengers were left to suffer overflowing toilets and nothing but a minimal supply of junk food, all with the terminal they'd left hours before within plain sight. The infamous day, widely publicized, is credited with pushing Congress closer to passing legislation in 2009 that banned waits of more than three hours.

What's worse than being stranded on a nice big air-conditioned Airbus? Spending the night waiting to be released from one of those little puddle-jumpers. You know the ones – can't even stand up straight, one tiny toilet in the back even Kate Moss might struggle to navigate. Passengers who signed up for what should have been an easy-peasy Houston to Minneapolis shuttle flight back in 2009 were instead subjected to a night on the tarmac in Rochester, Minnesota, with limited food and drink and an overflowing toilet – all with empty gates at the small, regional airport at the ready, all within plain sight. What went wrong? The airline, ExpressJet, blamed it on the lack of facilities available at the airport; it later was revealed that the airline simply bungled the situation. For its general stupidity, ExpressJet was eventually fined $100,000 by the Department of Transportation.

It was only supposed to take about five hours for Virgin America Flight 404 to get from Los Angeles to New York City, but passengers were instead subjected to a 16-hour ordeal, which involved a seven hour stint on the ground at an airport in Upstate New York. Diverted to Newburgh's Stewart Airport due to high winds in JFK, not only were passengers not allowed to leave the plane, they were forced to endure high-strung cabin crew, who, according to newspaper reports, took to rationing out Pringles – four chips per customer. Salvation eventually arrived, in the form of a JetBlue employee, who boarded the plane and announced – to wild applause – that the airline would be providing bus service for the hour-long ride to New York City.