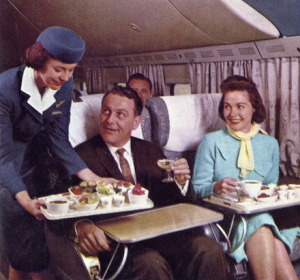 Let's make one thing clear from the start. Here at Airfarewatchdog.com, we love flight attendants. We find that if you're nice to them, they'll be nice to you. True, they're human beings just like everyone else, and sometimes they have a rough day. And let's face it, they do not have an easy job. You think you have it bad as a passenger these days, but think about it – you're sitting in your seat, bummed that you have six more hours of canned air, cramped seating and crummy CBS sitcoms until you get wherever you're going. Now imagine not even having a moment to breathe the fresh air in your destination, before you have to get back on board and do it all over again, with a cabin full of complainers? It's to enough to drive anyone crazy, and sometimes it actually does. When flight attendants turn bad, they often do so in some very remarkable ways. Here are nine cautionary tales from the sky.

When a handful of business class passengers on an Air France flight from Tokyo to Paris noticed their wallets had been lightened to the tune of thousands of dollars mid-flight, their complaint lead to the arrest of a 47-year-old flight attendant, who admitted to 26 counts of inflight theft, but was said to have been responsible for more than 100 other reported instances on Asian routes the airline served. The sticky-fingered stewardess, known only as Lucie R., was found to be in possession of a treasure trove of stolen goods, including pricey Cartier jewelry.

NO ORANGE JUICE FOR YOU!

Next time you upgrade to First Class on American Airlines, you might want to get a read on your cabin attendant's mood before making any special requests. In an incident born to go viral on the internet, one poor passenger on a Sacramento-Dallas run learned the hard way that requesting orange juice with breakfast might just be a federal offense. The simple request is said to have sent the attendant over the edge, leading to bouts of screaming, yelling and intimidation. In the end, the passenger – still OJ-less – was issued a warning for allegedly "threatening, intimidating or interfering with a crewmember." American launched an investigation, but never reported its findings.

A 12-year veteran attendant on South African Airways was arrested last week in Sao Paulo for allegedly trying to mule five kilograms of cocaine back to Johannesburg. SAA employees have a somewhat colorful reputation for drug smuggling as a way to pick up some extra cash, or at least trying to – they seem to get caught an awful lot. Another former crew member is currently serving a 7-year sentence for trying to smuggle three kilos of coke out of London; there have been multiple documented instances of SAA cabin crew being caught red handed.

Most people who get crummy assignments from their boss just get mad; 19-year-old Eder Rojas, a flight attendant with Compass Airlines, got even. Rojas, angered at having to work the not-so-glamorous route of Minneapolis to Regina, Saskatchewan, was charged with setting fire to the plane in mid-air, forcing an emergency landing in Fargo, North Dakota. All 72 passengers and four crew members on board were safe. The same could not be said for Rojas' job.

You want your flight attendant to be nice to you, but a sixteen-year-old boy alleged to authorities that flight attendant Jaime Samia, 57, went the extra mile and then some on a 2009 United Airlines flight from Los Angeles to Chicago; Samia was charged with misdemeanor battery and ordered to appear in court on charges that he spent the flight giving hand rubs and making inappropriate remarks to the young boy, who reportedly asked Samia to stop, but to no avail. Someone needs a refresher on the whole good touch / bad touch front, sounds like.

TAKE THIS JOB AND SHOVE IT!

America couldn't really make up its mind about former JetBlue flight attendant Steven Slater, who quit his job in spectacular fashion last year, telling a cabin full of passengers to shove it, grabbing some booze and pulling the emergency slide on a plane that had just landed from Pittsburgh. Hailed as a working man's hero by many and chastised as a mentally imbalanced creep by others, Slater – who at one point even asked for his job back -- became comic fodder for TV writers and was tipped by many journalists as one of the biggest newsmakers in 2010. Only one problem: Slater's spectacular tale of retaliation against a passenger that had assaulted him was later called into question; he was later ordered to seek treatment as well as pay restitution to the airline.

DOORS ARE ARMED, AND SO IS YOUR FLIGHT ATTENDANT

Next time you ask for a glass of water, do so nicely, at least if your flight attendant happens to be Kimberly Chase, a former Great Lakes Airlines employee who, in 2009, was caught reporting to work on a flight out of Denver with not one, but two handguns on her person. One of them? Fully loaded. Chase isn't the first to show up for work armed to the teeth; last June, Delta attendant Amber Robillard wound up in jail after showing up to work an Indianapolis-Atlanta flight packing heat in her purse. Watch out!

Australian carrier Jetstar had to issue an apology to a 15-year-old girl back in 2009 for the behavior of one of its flight attendants, who chatted her up as she waited to use the lavatory mid-flight, then tracked the girl down on Facebook after he caught a glimpse of her full name on her boarding pass, sending creepy messages calling her "mature for her age" and asking for her phone number and more details about where she lived, so the two might become "friends." Luckily, the girl's mother stepped in and put a stop to the whole thing, after the girl's would-be suitor started getting hostile.

TERROR IN THE AIR

When American Airlines fired Rodney Lorenzo for throwing a coffee pot at a fellow attendant in anger while on the job, Lorenzo waged a one-man campaign against the Dallas-based flyer, threatening to reveal airline safety secrets to Islamic terror groups. Two anonymous letters traced to Lorenzo warned that corporate safety and security information had been disseminated to 25 Muslim organizations worldwide. Lorenzo warned: "Karma will soon bite back and your aircraft will begin to fall from the sky like dead birds." Brought up on federal charges, Lorenzo was later released on $50,000 bail.