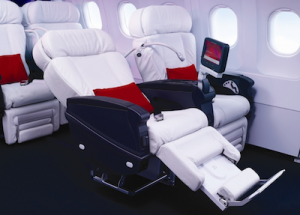 Now, more than ever, upgrading to a more comfortable seat when you fly can be a trip-saver. It can be surprisingly cheap to either get an economy class seat with more legroom, a wider seat, or even a seat in business or first class without paying full freight. Here are seven ways to help make your next flight more comfortable.

1. Buy a seat with extra legroom. JetBlue, Delta, US Airways, United and other airlines will sell you a few extra inches of legroom at the front of the economy cabin or at exit rows for a reasonable upgrade fee. We think this is money well spent. JetBlue charges as little as $10 extra for seats with 38 inches between rows, and has more leg room (34 inches between rows, rather than the 31-32 inches typical on some airlines)'even if you don't pay more. But, don't fall for money-stealing schemes like US Airways', American's, Continental's and Delta's effort to charge for "special" seats towards the front. Unless they are bulkhead or exit rows, these seats have zero extra benefits other than exiting the plane first. United's Economy Plus seating (offered on all flights except those flown by EMB-145s and CRJ-200s of United Express) is a different story. On Delta's international aircraft flying long-haul routes, a new Economy Comfort section is being installed offering an additional four inches of leg room and up to 50% more recline than before. These seats are at the front of the economy cabin and also receive complimentary alcoholic drinks (all other economy passengers are limited to beer and wine).

2. Buy a cheap business class seat on a discounter. Air Tran and Spirit sell wider, roomier business class seats (ideal if you're a "wider" passenger), for far less than most other airlines. Air Tran will let you upgrade to business from any fare at the airport on a first-come, first served basis for $49-$129 per flight segment (that's one take off and one landing), or from higher economy fares in advance (whether this product will survive the merger with Southwest is anyone's guess); Spirit calls their business class "the Big Front Seat" and fares are often less than other airlines' economy fares, especially if you're a member of their $9 Fare Club.

Virgin America offers last minute upgrades (6 hours before flight time) to its luxe first class cabin for between $70 and $270 each way depending on the length of the flight, and also sells a Main Cabin Select product for between $35 and $160 each way depending on the length of the flight, which features six extra inches of leg room and one free bag although it is the same seat as economy. US Airways has a similar program called "GoUpgrades" allowing passengers to upgrade from economy class to first for $50 to $500 each way, depending on flight length, 24 hours or fewer before flight time. You can upgrade by phone or at the airport, and international flights are included. See this chart for more details about these and other programs. And United has long had its Economy Plus option, offering "up to 5 extra inches of legroom" in coach, starting at $9 per flight for shorter hops and going up to, say, $209 each way on a LA to Tokyo flight. There's also a $425 per year "annual option" giving you unlimited upgrades to the roomier seats, subject to availability of course. Remember that with the merger between United and Continental, some flights may be operated by aircraft without Economy Plus. Other airlines may offer spontaneous upgrades for bargain prices at the airport, so be sure to ask about them at check in. You never know what you might snag.

3. Look for Y-UP and Q-UP fares. These full-fare economy class fares, for domestic travel only, can be upgraded for free to business or first class, but they're not dirt cheap, aren't fully refundable and come with other restrictions. Buy them online, by phone from your airline, or through travel agents. Be aware that they often appear as first class fares on search engines, which fail to sort out the lack of flexibility these fares offer (they would also price out as very expensive economy tickets with immediate upgrades to first class but zero change ability). Another caveat, if your flight is canceled or delayed and you are moved to another flight with a full first class cabin, your ticket may be treated as economy class, losing the upgrade.

4. Choose planes with more legroom. Not all aircraft are created equal. Check out the "seat pitch" data at Seatguru.com and book on an aircraft on which seat rows are spaced further apart. Doing so can earn you as much as five inches of extra legroom. Remember that aircraft are constantly going under the knife with airlines like United and Delta adding extra legroom to the first few rows of economy like crazy on international aircraft (certain Boeing B757, 767, 747, 777, and Airbus A330s).

6. Use miles to upgrade. This is one of the highest-value ways you can spend your miles. Upgrading a $400 fare on United from New York to LA to a $2000 business class fare for 30,000 miles is a better deal than spending those miles on a $400 fare. Unfortunately, many airlines now charge miles plus cash to upgrade (see chart.)

7. Be loyal. Upper-tier frequent flyer program members get free upgrades, priority access to exit row seating at no charge, and other perks on many airlines, so stick with one airline, fly frequently, and attain "premier" or "elite" status with one of the alliances. Chances are most of your travel will be on a partner carrier of one of the three major alliances.