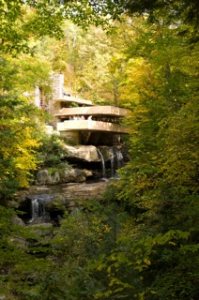 8 great reasons to fly to Pittsburgh (besides amazingly low airfares)

Pittsburgh might not be on your list of 1000 places to fly to before you die, but perhaps it should be. With the opening of a swank new Fairmont Hotel, a cultural scene that rivals that of many larger cities, and its proximity to an architectural gem that everyone should see before they head for the great beyond, this city of rivers and bridges deserves a visit. Plus, of course, now that Southwest Airlines and JetBlue fly here, airfares to Pittsburgh are amazingly cheap.

There's no place quite like Pittsburgh, an implausible and affable place of distinct and likeable neighborhoods, littered across a series of steep Southwestern Pennsylvania hills and secluded hollows, perched on cliffs and huddled down by its famed three rivers. Once at the forefront of the industrialized world, the still blue-collar city is shedding its old skin and growing into a new identity, as a knowledge center and a place of creativity.

That's not to say that Pittsburgh's gone pretentious or anything. This is still the home of the Steelers and the Pirates, though the latter ended a depressing season with a lower approval rating than their Somali namesakes. But football season's just heating up, and there are also the Penguins, just now getting out on the ice. Hate sports? No matter – this is still a great place to kick back and knock back a few (local) beers, make some new friends maybe; it's a perfect city for slowing down and just enjoying life for a couple of days. We've got eight great reasons to visit Pittsburgh (or, rather, da Burgh) right now.

GET IN THE ZONE There are plenty of cool neighborhoods in town, perhaps none quite as nifty as Lawrenceville. Located not far from downtown, this industrial center along the Allegheny River that served as arsenal to the Union Army during the Civil War is now a magnet for young creatives, lured in by Lawrenceville's charming vibe. The neighborhood is part of the city's 16:62 Design Zone, an area that features more than 100 home decor-related businesses catering to all tastes and budgets. While in the area, stop in at Dozen, the neighborhood bakery that's the rage around town right now.

$10 OPERA TICKETS! One thing a lot of first-timers don't know about Pittsburgh is that while the city isn't as big as it used to be, it still retains a vibrant cultural scene from its heyday. From ballet to world-class art museums, a marvelous symphony and a healthy theater scene, Pittsburgh has just about everything you could want a city to have, arts-wise, while, for the most part, keeping everything super accessible. Curious newbies can take advantage of $10 main floor tickets to the Pittsburgh Opera, home-based at the historic (and breathtaking) Benedum Center. Next up, in mid-November? Donizetti's Lucia di Lammermoor.

GOOD EATS Pittsburgh has long been a town of simple tastes; for far too long, it seemed like the dining scene was content to hide out at least a couple of decades back from the present time. Recently, things have been changing, and rapidly; we're nuts for the ingredient-conscious, New American dinners at Eleven, the hardcore farm-to-table Legume Bistro in the Regent Square district and the sleek look and feel – not to mention the tasty American contemporary food and cocktails at the loungy Spoon in East Liberty. In short, you can eat really well here now, and not a moment too soon.

IT'S NEAR FRANK LLOYD WRIGHT'S FALLINGWATER Just an hour's drive or so from the city is one of the most iconic dwellings in the known Universe, the weekend home Wright designed for a wealthy Pittsburgh family. Some people come to PGH just as a jumping off point to visit, but of course, there are many other great things to see and do here. (Tip: only the extended tour allows indoor photography, and it's well worth the $67 admission, although there are less expensive tours as well). And speaking of nearby sites, the Flight 93 Memorial is also within driving distance, although the final exhibit is still in the planning stages. It's still a moving experience even at this early stage.

TRY THE COFFEE Pittsburgh is full of surprises; you probably didn't know it had a killer little café culture brewing, did you? From the locally-roasted liquid happiness at La Prima Espresso Bar (205 21st Street) to the sleek and sophisticated 21st Street Coffee down the block at #50 – they use beans from Chicago's famous Intelligentsia – to the cozy, sit down and stay awhile scene at Enrico’s Tazza d’Oro in the heart of residential Highland Park (1125 N. Highland Ave.), coffee lovers are covered.

PLAY THE MARKET The city's Strip District is famous as the home of its wholesale markets, late-night gin joints and the obscene sandwiches at the skankeriffic Primanti Brothers, but lately it's been showing signs of joining the 21st Century. This fall saw the inauguration of the ambitious Pittsburgh Public Market, a Friday, Saturday and Sunday affair on Smallman Street between 16th and 17th Streets that showcases the region's bounty. A must-stop on any weekend visit.

HIT THE MATTRESS Pittsburgh is full of museums, some of them quite famous; if you visit just one, it should be the off-the-grid, awesomely unusual Mattress Factory. Tucked away in the back streets of the often-ignored North Side, artists have been creating installations in the space since the late 1970s. The museum offers a unique residency program, which allows the artists to live on site while dreaming up and then executing the installation, or work of art. The museum is currently hosting an intriguing exhibit from the Lam Center of Contemporary Art in Havana, Cuba; the show deals with issues of race and racism in contemporary Cuban art.

SQUARE OFF Speaking of mattresses – we're loving the sparkly, zen-like new Fairmont Hotel that's popped up right off Market Square in the heart of Pittsburgh's walkable downtown. After test-driving plenty of local hotels over the years, it's safe to say that with the arrival of the Fairmont, we're already mostly done forgetting about the competition. A vast fitness center, a happening lobby bar and quiet, contemporary rooms, nearly all of them with great views (request one overlooking the skyline's crown jewel PPG Building), make this a great hotel just to waste a weekend in, never mind the city. We didn't try the restaurant, Habitat, on our two recent weekend visits but will next time.