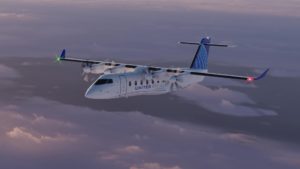 Would You Fly on an Electric Plane? United Is Betting on It

While electric cars are becoming more common these days, the idea of flying through the air in an electric powered airplane as a commercial passenger still hasn’t taken off (pun intended). However, it appears we may be getting closer than ever to commercially operated electric flights. In July, United announced its plan to buy 100 electric planes by investing in the Swedish startup Heart Aerospace.

United Could Fly Electric by 2026

Heart Aerospace is developing a 19-seat electric aircraft, which could enter service as soon as 2026 with the help of investments from United, Breakthrough Energy Ventures, and Mesa Airlines. The regional carrier, Mesa Airlines, has agreed to add the 100 ES-19 aircraft to its fleet subject to safety and operating requirements.

United and Mesa have also agreed to acquire up to 200 electric vertical takeoff and landing (eVTOL) aircraft from air mobility company Archer in an effort to provide air taxi service in urban markets, which could, for instance, fly passengers from Hollywood to LAX.

It’s no question that the commercial aviation industry is polluting the air. A report from the International Council on Clean Transportation indicates that all commercial operations emitted nearly 1 billion metric tons of CO₂ in 2019. Part of the problem is that short flights operated by large aircraft are simply not the most efficient way to transport passengers.

In United’s press release, Carmichael Roberts of Breakthrough Energy Ventures stated, “We believe electric aircraft can be transformational in reducing the emissions of the industry, and enable low cost, quiet, and clean regional travel on a broad scale. Heart’s visionary team is developing an aircraft around its proprietary electric motor technology that will allow airlines to operate at a fraction of the cost of today and has the potential to change the way we fly.”

Where Could United’s Electric Planes Fly?

The ES-19 aircraft will have the potential to fly up to 250 miles. This means there will be a limited number of routes it could serve and would likely be used as an alternative to driving for people commuting from a small regional airport to a larger connecting hub or a city center.

United indicated that the ES-19 could be operated on over 100 regional routes out of most of its hubs. The two routes mentioned in the press release, between Chicago O’Hare International Airport (ORD) and Purdue University Airport (LAF), and San Francisco International Airport (SFO) to Modesto City-County Airport (MOD) show that these aircraft will likely fill niche markets at first.

As far as replacing jet service on current regional routes, it would seem like slot restricted hubs such as San Francisco and Newark would not be able to accommodate a 19-seat aircraft if it has limited slots available. United will likely prefer to use those slots to carry more passengers on larger aircraft. Therefore, I think these electric planes will be better utilized at smaller hubs such as Denver and Houston where the short range can connect smaller communities with United’s hub cities.

The electric aircraft could also open up the possibility for commercial service at smaller airfields for commuters to utilize in order to avoid traffic. This could be to connect hubs by adding new, smaller markets that don’t have existing commercial service today such as the route United mentioned between Purdue (LAF) and Chicago-O’Hare (ORD), or, starting new regional service from smaller airports closer to city centers such as Hawthorne Municipal Airport (HHR) in Los Angeles.

The routes to be flown will be speculated until they are announced, but it’s clear that United will be limited initially with what will be feasible for such a low-density aircraft. United hopes that these electric aircraft will evolve into a larger seat capacity in the future.

President of United Airlines Ventures, Mike Leskinen told Reuters, “We don’t want to wait for 50 seats, 75 seats, 125-seat aircraft. We want to get involved now by investing in a company that we think has a big technological lead with the hopes of over time working with them to move the size of the aircraft to larger gauge.”

Are Electric Planes the Future of Air Travel?

I think it’s likely we’ll see more electric flights in the future, but I still believe it’s a long way from becoming widespread. Certification for electric planes will be more heavily scrutinized than electric vehicles due to the inherent risk of flight and the recent issues with batteries on Boeing’s 787 aircraft. Five years down the road is an ambitious goal for the ES-19 aircraft to get through all of the safety inspections and design certifications it needs to become FAA approved.

The main issue of electric powered aircraft is getting more power without adding too much weight so that the plane can still fly. Although this is challenging, battery technology has come a long way and I believe it will continue to advance in a way that will make commercial air travel on electric planes practical, albeit on a short-range basis for the foreseeable future.