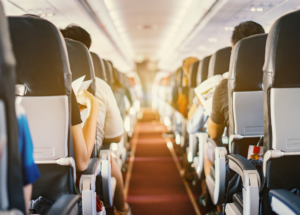 Why the Aircraft You're Flying on Matters

Flying on a newer aircraft with all the amenities beats one with musty seats and minimal inflight entertainment options. A more modern aircraft can even help you feel better after a long flight.

Some of the major factors affected by aircraft type and design include:

Seasoned travelers looking to get the most out of their flight experiences typically check the aircraft they’ll be flying before booking a seat. If you’re flying business or first class, this is especially important as the products offered can vary widely.

Here’s what you need to know to find the exact aircraft for a better flying experience.

When you’re looking on Google Flights, you can see the flight details and aircraft listed directly on the booking page. Here’s an example of a flight going from Salt Lake City to San Jose, Costa Rica.

I’m curious to know what aircraft I’m flying from the Dallas to San Jose leg. Is the aircraft new or old? Are the seats comfortable? Does it have inflight entertainment options for my kids? Is it worth it to upgrade to first class?

One of the most helpful sites for finding details about the aircraft is SeatGuru.com. You don’t have to go all the way through booking to view the seat map and there’s a lot of information that makes a little extra search on this website worth it.

So, grab that flight number, airline, date, and plug it in.

After you click on that, you can take a look at the seat map. The seat map will show how many seats are in each class, how they’re configured, and where each seat is situated in the cabin.

SeatGuru will also show you the exact specifications of the seat, including the pitch, width, and type of seat.

The seat map is color-coded to indicate desirable seats as well as seats you should avoid.

Below the seating details and under the ad, you’ll see a space for traveler photos and in-flight amenities.

The photos are only of first class in this example, but we can still get a sense for the plane from them.

Of note in the amenities category is the in-flight video, which can be accessed through personal portable devices. In other words, there is no in-flight entertainment device on this plane.

If you’re a traveler that brings your own tablet, this won’t be a problem. If you’re not a fan of packing extra entertainment to keep you occupied on a four-hour flight, you’ll want to look at other airlines to fly.

More details are available in the overview provided where we learn this aircraft has been refurbished, but it is definitely BYOD.

The user comments also let us know this is a nice, new plane, but the configuration is tight and there are only two bathrooms for the whole plane, which are also very small.

Another thing you can do is take the exact aircraft and airline and do a good, old Google search to find reviews of the plane.

News and reviews of this particular aircraft tell us it has been retrofitted to include 12 more seats in economy class. To fit in these seats, smaller bathrooms were installed, as well as seats with less cushioning and less legroom. The in-flight entertainment has also been removed from the seats. Sources also say the conversion will be complete in early 2021, so for our example flight, there’s no chance we’d score an in-flight entertainment system or cushy seat on an older model plane.

While one review of business class on this plane says “even the shortest hops are a pleasure,” others call it a “torture tube,” particularly for economy fliers.

By now, you should have enough information to make your decision. But if you want more granular information about the exact aircraft, you can try these methods:

Research the Exact Aircraft by its Tail Number.

If you’re at the airport and curious about where your plane has been, you can plug the number from the tail on the plane into flightradar24.com to see where it has been.

If you’re at home wondering what plane you’ll get, you’ll be interested to know that a specific aircraft may not be confirmed for your flight until a few days before takeoff. However, you can make a guess based on recently used airplanes for that route on flightradar24.

Looking for the Age of the Aircraft?

If you want to know the age of the plane, you can find it on Plane Mappers by inputting the plane’s tail number. Finding the age of the plane may not tell you how new the interior is, however. Airlines retrofit old aircraft on the regular, particularly Delta, who has the oldest fleet in the U.S. Yet, the airline doesn’t feel like it has the oldest fleet. Older aircraft retrofitted with new interiors like this can make a plane feel new again.

Why an Aircraft Will be Different from Airline to Airline

Your flight experience will vary widely from airline to airline because of the design of the cabin. Some airlines operate with the philosophy that customers are willing to pay more for a comfortable experience, while others offer lower fares with considerably less frills. The biggest factor in passenger comfort--by far--lies in how the airline designs their aircraft.

Airlines have discretion -- with approval by the Federal Aviation Administration (FAA) -- on how many seats they can fit in an aircraft, how the seats are arranged, how wide their seats will be, how much legroom they offer, what inflight entertainment options are available, what the overhead bins are like, how big the lavatories are, and more.

By using some of these tools, you’ll have information to help you make a decision to fly how you want to--whether that’s an economy seat on Frontier or a first-class seat on Qantas.