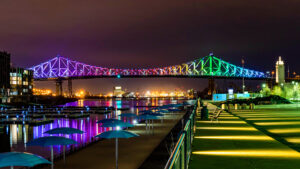 Messages of Hope Around the World Amid the Pandemic

Noemi took her first long-haul flight at age six when her family moved from Spain to the US. Her love for airplane rides was solidified on that trip, and 30-something years later she challenges herself to visit a new place every year. Noemi joined SmarterTravel in 2019 from Oyster.com, where she worked for five years leading the Photo Operations team. Along with assigning photographers and producing visual content, Noemi is a trained photographer. Her favorite thing to photograph is the everyday - capturing daily life and little moments around her neighborhood in Brooklyn. Her work has appeared on Oyster.com, ABC News, and AOL. You can follow her on Instagram at @NoemidelaTorre. Handy item I always pack: "An SD card reader for my phone. The lightning to SD card reader is awesome for downloading RAW files from my DSLR to my iPhone. If I don’t bring a laptop on vacation this lets me edit and post photos on the go.” Ultimate bucket list experience: “Tokyo, Japan. My friends and I started @ramenclubnyc here in NYC and I’d love to go eat ramen in Japan someday.” Travel Motto:: "Keep calm and book a flight." Aisle, Window, or Middle Seat: "Window for naps!"

In this time of isolation, businesses and individuals around the world are sending out messages of hope. Discover, in photos, how we’re keeping our spirits up during the COVID-19 pandemic.

In Philadelphia, the Four Seasons Hotel lit up its windows with a heart.

The Encore Boston Harbor lit up windows in vacant rooms in the shape of a heart. A few nights later it displayed the message “Be Strong.”

During the nationwide lockdown, Italians quarantined in their houses are putting up rainbow flags with the words “everything will be fine.”

Rainbow messages of hope from children all around England are displayed on a digital advertising board outside Intu Victoria Centre in Nottingham.

Rainbow drawings appear in a home window with the slogan “ca va bien aller” (“it’s going to be OK”) as a message of hope in Montreal.

Famous landmarks in New York City were lit up blue in a tribute to healthcare workers battling COVID-19.

The Jacques Cartier bridge will be lit up in rainbow colors throughout the month of April to let Montrealers know they’re not alone.

The Buskirk-Chumley Theater in Bloomington, Indiana, has put the famous Mr. Rogers quote on its marquee.

A sign on the lawn of the Rutherford United Methodist Church in Rutherford, New Jersey, offers a message of hope.

A sign reads “heroes work here” in front of the entrance to Atlanta’s Emory Hospital.

In Spain, residents all over the country came out to their windows and balconies to applaud healthcare workers.

#ClapForOurCarers has become a weekly demonstration of appreciation in the U.K. Kensington Palace posted a video of Prince George, Princess Charlotte, and Prince Louis joining in to clap for healthcare workers.

While on lockdown, people in Italy have clapped and cheered and sung opera from their balconies. Recently, people all over the country staged a “flash mob,” shining lights out of their windows.

This story originally appeared on our sister site smartertravel.com.