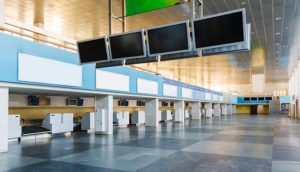 8 Abandoned Airports Around the World

Current stay at home orders have turned some of the world’s busiest airports like Atlanta’s Hartfield-Jackson and London-Heathrow into virtual ghost towns. Planes are parked, lounges closed, and storefronts shuttered, transforming these once teeming transit hubs into a cutscene from "I Am Legend." While the travel industry always rebounds, and terminal traffic at major airports should eventually return, sometimes things don’t go as planned. Construction costs, border closings, and catastrophes can sometimes cause a once-thriving airport to go kaput.

Here are eight examples of eerily empty commercial airports across the globe and the reasons they were abandoned.

It might’ve been wiser to build windmills at the site of Don Quixote Airport, aka Ciudad Real Central instead of another Spanish airport in 2009. Situated about 115 miles south of the Spanish capital, the 1-billion-euro Ciudad Real Airport construction site was ultimately chosen because of its position halfway between Madrid and Seville. However, mismanagement, political problems, and a failure to properly link up the airport to high-speed rail led to its quick demise. Operational only through 2012, the airport’s managing company filed for bankruptcy, leaving the airport vacant for seven years.

Last year, the property was purchased for a pittance with plans of a commercial reopening in the near future. However, with the COVID-19 global pandemic in full swing, the only aircraft arriving at the "aeromuerto” are those being kept for temporary storage.

Once the main international air link for the island of Cyprus, Nicosia International Airport, ceased operations following the Turkish Invasion in 1974, leaving a terminal suspended in time. A relic of a different period in the now divided capital, the structure sits off-limits in the UN-controlled buffer zone separating the Greek and Turkish controlled sides of the Mediterranean island. The last 40 years has not been kind to the airport, as its slow deterioration shows the signs of an island separated.

Reduced to rubble and now the site of a toxic waste dump, the $86 million-dollar airport's ribbon was cut in 1998 by Bill Clinton and Yasser Arafat, giving Palestine its only airport. Also known as Gaza International, the airport operated for only a few short years before being bombed by an Israeli airstrike that destroyed the radar and control towers. In 2002, sections of the runway were bulldozed by the Israeli Army, leaving the airport inoperable. Very little remains of the structure that was financed with help from Japan, Spain, Germany, Saudi Arabia, and Egypt.

Not much still survives of Denver's once primary Stapleton Airport, shuttered in 1995, other than its iconic control tower. Two years after being decommissioned, a hail storm severely damaged the roof of its neglected concourses. Deemed not worth fixing by the city, it was decided that tearing down the terminal was the best solution. The tarmac was redeveloped into a residential area, leaving only a 12-story air control tower standing. The tower has been recently repurposed as an aviation-inspired restaurant, the Punch Bowl Social.

Serving as the gateway to Greece for sixty years, the Athenian airport shut down in 2001 as air traffic shifted to the newly built Eleftherios Venizelos International Airport ahead of the 2004 Summer Olympics. Plans to redevelop the site into a ritzy coastal enclave and marina are on the table, but until then, the derelict airport still stands as it did when it ceased operations nearly 20 years ago. Several Olympic Airways jumbo jets remain parked on the tarmac, slowly fading away into the Aegean sun.

Across Jamaica Bay from New York’s JFK resides the city’s first forays into commercial aviation, Floyd Bennett Field. In its halcyon days, the airport hosted record-breaking flights from famed aviators like Lucky Lindy, Howard Hughes, Douglas “Wrong Way” Corrigan, and Amelia Earhart. Still, it never caught on as a viable commercial option due to its location. Bennet Field was acquired by the United States Navy, and, after its decommission in the 70s, the buildings were in disrepair before being listed in the National Register of Historic Places in 1980. Many of the original structures still stand, including vintage hangars and the art deco passenger terminal, which now serves as a visitor center.

Historic Tempelhof has had a long list of tenants, from Nazis, Soviet spies, the U.S. Army, and nowadays joggers and cyclists. Following the airports decommission in 2008, the grounds of the airport have been converted into a city park, making Tempelhof’s runways one of the largest public spaces in Europe. The terminal, which once was the world's biggest building before the construction of the Pentagon, doubles as a popular movie set (Hunger Games, Bridge of Spies, Valkyrie), and its echoing corridors can be experienced on guided tours.

On June 25, 1997, a massive eruption of the nearby Soufrière Hills volcano system wiped out the British Overseas Territory's only runway at W.H. Bramble airport and much of its former capital Plymouth. With no airport until 2005, the small Caribbean island of Montserrat was only accessible by boats and helicopters. All that survived the pyroclastic flow was bits and pieces of the runway and a shell of the control tower.

Related: The Coolest New Airports and Terminals Opening in 2020

Stay on top of breaking sales, fare drops, and more! Follow us on Twitter @Airfarewatchdog. And make sure to sign up for FREE airfare alerts to be notified when prices drop