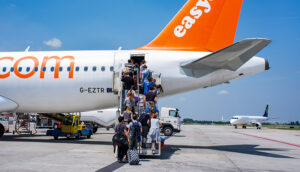 When searching for a cheap flight in Europe, odds are a low-cost carrier is going to come up at the top of your ticket search. With over 30 budget carriers crisscrossing over European skies, nearly every route now offers a discount carrier vying for a slice of the cheap price pie. However, with incredibly low prices comes a no-frills flying experience. Unexpected fees and gotchas may get you hot under the collar even before you board the plane for your sunny holiday destination.

But if you play your cards right and are aware of tactics bargain airlines employ, you can score a flight for less than a bus fare. Below, I’ve taken the top 9 major European low-cost carriers and broken them down in regards to services and stats to see which fared the best (and worst) in each category.

Which Low-Cost European Carrier Has the Best Fare Prices?

If the price is the right, then it must be a Ryanair flight. The carrier that kicked started the ultra-low-cost craze in Europe still offers the cheapest flights out of the pack. Benefiting from a standardized fleet and robust route network, Ryanair’s base prices are generally the lowest you’ll find in most of the markets that the Irish-based line operates. Flights starting at £5/€5 one-way are commonplace in Ryanair's near-weekly sales, and when booking in advance, you'll often find roundtrip tickets that are cheaper than your cab fare to the airport. The fees and upsells, on the other hand – we'll touch on later.

As the pet-project of behemoth Lufthansa Group, Eurowings is in what seems like a continual period of transition. Once a regional airline, now turned into a consolidated low-cost carrier, who planned on long-haul expansion before shelving the idea only months later. Eurowings hasn’t found its footing against its namesake Euro competition, and that’s translated to higher overall prices for customers. In certain focus markets, you'll discover Eurowings to be the cheapest option, but don't expect to see rock-bottom fares à la Wizz or Ryanair on this curious carrier.

Which Low-Cost European Carrier Has the Best Carry-On Baggage Allowance?

With a size allowance of 56x45x25cm, Jet2 offers the largest permitted packing space you can carry-on among European budget carriers, and its onboard weight restrictions are the most generous too. 10 kgs (23lbs) are allowed for a larger cabin bag, which doesn’t include the combined weight of a personal-sized item like a purse, laptop bag, or small backpack that can fit under the seat in front of you like most other low-cost cabin restrictions. Volotea and Vueling are neck-and-neck for a close second, both allowing a slightly smaller 55x40x20cm onboard bag and a personal item with a combined weight of 10kg.

Known to tinker with their baggage allowances and sizes every few years, Ryanair's current carry-on policy is one of the most stringent amongst Europe's budget operators. Customers booked on Ryanair non-priority tickets are only allowed a small bag measuring 40x25x20cm sized to fit underneath the airplane seat at no charge. Think along the lines of US-based low-cost carriers Frontier, Spirit, and Allegiant’s personal item only policy but with even smaller measurements. European sizes, amirite? Wizz Air and Norwegian Air’s recent downgraded limits are equally as bad but do allow a few measly extra centimeters and different size dimensions.

Which Low-Cost European Carrier Has the Best Checked Baggage Prices?

With lenient size guidelines (checked luggage must be under 275cm by length + width + height), and several different weight options 15kg, 23kg, and up to 32kg, Easyjet comes in tops for checked baggage options. Customers have more flexibility in price by choosing the weight they need without the worry of paying for extra unneeded space. Rates vary by destination, but Easyjet features some of the lowest initial prices for items heading into the hold starting at just £7/€8.5 each-way when booked online prior to departure. Vueling and Transavia also offer multiple price and size points for checked luggage to better suit the traveler's needs. Rates on both carriers begin around €9 for a 15kg bag when booked online.

The real loser in this category is every flyer that procrastinates and pays for baggage at the airport. On all European low-cost carriers, hefty fees to the tune of twice the price await travelers at the airport who don’t pay for luggage online in advance. With that aside, Norwegian Air is often the worst offender. The airline charges $60 per bag from the US to Europe if paid for online (which falls in line with Delta, American, and United), but a whopping $100+ each-way on transatlantic bags brought to the counter without prepayment. If flying just within Europe, Norwegian's baggage fees aren't as brutal, but figuring out their confusing fee chart is.

Related: 8 Versatile Backpacks That Are Free to Carry On

Which Low-Cost European Carrier Has the Most Destinations?

With roughly 225 destinations dotting its extensive route map, Ryanair is head and shoulders above its competition, not only in Europe but in the world, as the LCC with most airports served. Behind America’s Big-3, China Eastern, and Turkish, Ryanair falls into sixth place worldwide with its number of total takeoff destinations that include nearly every country in Europe and several in the Middle East and North Africa.

Although smaller bespoke carriers with lesser reaches exist, out of the pool of larger European budget operators, Jet2’s footprint could go up a size or 2. Hovering at around 70 destinations on its airport roster, the UK leisure carrier focused on seasonal service has room to grow after it acquires a few additional planes from defunct Thomas Cook later this year.

Which Low-Cost European Carrier Has the Best Long-Haul Network?

Norwegian wins this category hands down. Out of the major low-cost European carriers, it’s currently the only one that operates nonstop transatlantic flights to both North and South American airports. Budget long-haul flights between European airports and destinations like New York, Florida, and California regularly go on sale or have promo code discounts.

This Spanish-based low-cost carrier’s route map gravitates around airports in the south of Europe with a focus on seaside cities close to the Mediterranean. Therefore, its extended-range network is non-existent, with its longest scheduled flights falling under 4 hours.

Which Low-Cost European Carrier Has the Least Hidden Fees?

While the backbone of most LCC’s bottom line is tacked-on fees, there are a few that aren’t as greedy. I’m not saying they’re devoid of hidden costs; they just don't sneak them in under the radar. Considered budget branches of more established airlines, Transavia, Vueling, and Eurowings don't charge for boarding passes when checking in at the terminal, and some even allow free seat selection when checking in online, a rarity nowadays.

Running late and didn’t print a boarding pass? That will cost you (£20/€20). Need to dial the call center? Don’t even think about it. Both Wizz and Ryanair are the leaders in the clubhouse for added on ancillary fees. Text confirmations (€1), booking with a foreign credit card, and changing a name typo (£160/€160) are all subject to additional payments. Keep in mind that Wizz increases fees during the high season, so the baggage price paid in March will be much different than a peak summer getaway.

Which Low-Cost European Carrier Has the Cheapest In-Flight Food?

It only makes sense that a Hungarian-based airline would serve up the least expensive in-flight menu items for hungry travelers. Bad pun aside, Wizzair’s onboard menu features some of the cheapest meal deals for purchase amongst all European counterparts. A combo including a sandwich, soft/hot drink, and snacks like chips or cookies starts at only €6.50. And if a glass of red or white helps you through your journey, Wizz also brags the lowest average rates on wine too. However, if beer onboard is your tipple of choice, Eurowings offers the cheapest at just €3.50 a can.

I don’t know who in their right mind would willingly pay £25/€35 for a lukewarm airplane meal, but Norwegian Air seems to think that's a reasonable rate on their long-haul service across the Atlantic. Closer to home in Europe, they don't fare much better as the carrier’s in-flight menu was revealed as the costliest amongst European airlines with the average meal tallying about £10.50/€12.50 according to a study done by JetCost.com.

Which Low-Cost European Carrier Has the Best Airplanes?

Boasting one of the youngest fleets in the world, Norwegian’s planes provide the best modern onboard amenities when compared to­­ its cheapo counterparts. Especially on the carrier's Boeing 787's, which helped get the airline voted as World's Best Low-Cost Long-Haul Airline again last year. Features such as free wi-fi options, VOD, USB charging ports, and seatback screens on the carrier’s Dreamliners boost Norwegian into the best category among a sea of other budget carriers with aging planes and no in-flight entertainment.

As the go-to choice for both European carriers and those in the States, single-aisle Boeing 737s and Airbus A320s saturate the market. So how do you choose who has the worst when every airline is flying pretty much the same frames? You have to go with age. And with metal averaging 13.7 years old, Jet2 has one of the oldest fleets on the continent. Especially if you find yourself onboard one of the carriers 757 planes that are nearing 30 years old. While the age of aircraft isn't always the tell-all, Jet2 planes also lack inflight wi-fi, tv screens, and frankly, their seat cushions have seen better days too.

Breaking down which European budget airline is the best among the rest is a near-impossible task because there’s no cut-and-dried winner. For example, Ryanair might possess the most extensive route map and cheapest average fares, but their baggage allowance and hidden fees routinely rank among the worst. Similar reasoning can be applied to Norwegian Air who has one of the finest fleets and free wi-fi but charges over the top for food and checked luggage.

Ultimately, to best suit your situation when flying on the countless no-frills airlines Europe you'll have to decide which corners you're willing to cut and which amenities you're ready to shell out extra for.

A customer flying away for a quick weekend with a small backpack has different travel needs than a family of four looking to sit together and lug along several suitcases for an extended holiday break.

So, to successfully sort out which European LCC fits the bill for your flying style, shop around (the earlier, the better) and scan the fine print on which services might turn that rock-bottom fare into a mountain of fees. And lastly, don’t ever wait to pay for your hold luggage at the check-in counter on the day you depart, for your wallet’s sake.