How to Avoid Low-Fare Airline Gotchas

Have you ever searched for a flight deal and stumbled upon a ticket that looks surprisingly cheap compared to all the others? Well, the surprise might not end there if it’s onboard one of the many low-cost carriers’ expanding across the U.S. and internationally. Budget airlines like Spirit, Frontier, Allegiant, and Sun Country have been around for quite some time, but their no-frill pricing strategies are spreading into new markets.

So, if you’re a traveler unfamiliar with the tricky fare tactics that these carriers impose, here’s how to best avoid being blindsided by their added “gotcha” costs. 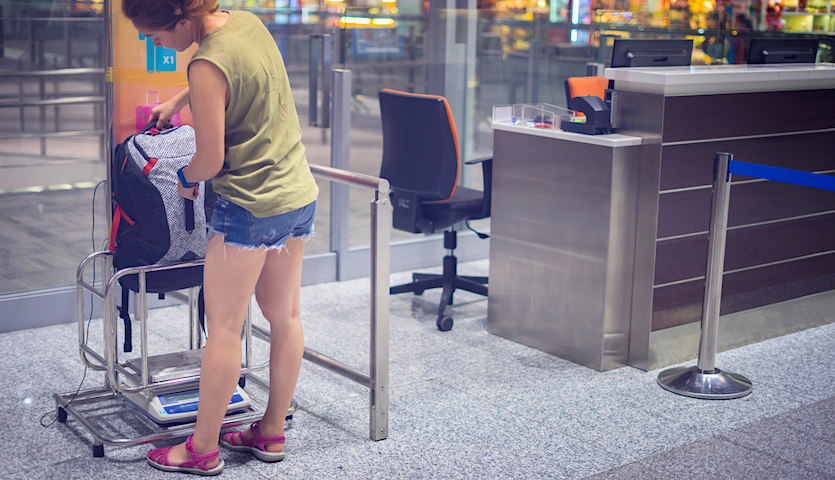 Public Enemy No. 1 when flying with a low-cost carrier is their restrictive baggage fees and ever-changing size requirements. While we have the most up-to-date pricing info on our handy Guide to Baggage Fees, other size and weight restrictions will vary by airline. However, the rule of thumb for most domestic low-cost carriers is that passengers are restricted to a personal-sized item onboard, and any other baggage beyond that costs extra.

Standard sized carry-on and first checked bags on domestic flights range from $30-45 when pre-purchased online, but easily can double in price when purchased at the airport, which leads to the biggest no-no of all when flying on a cheapo-carrier ticket. Never wait to pay last-minute at the airport. You're a captive customer when standing at the baggage counter, and the gotcha fees start compounding, negating any savings you thought you'd pocket by booking the cheapest fare available.

Pack light and follow the fine print. Double-check the baggage policy on the airline you're traveling on and don't try to hoodwink them. These detested baggage fees are what make up a lion share of these budget carriers’ bottom line, so expect strict enforcement on what’s allowed.

In some instances, booking a bundled fare package could end up a better bargain, or paying to check a bag instead of carrying it on might garner more bang for your buck. But whichever route you decide, pay for it pronto because the longer you wait, the more money you'll end up on the hook for.

If trying to elude these excessive fees completely, keep your onboard baggage to the permitted "under the seat in front of you" size. First impulses may make it seem impossible, but with this guide on how to pack in just a personal-sized item bag, you'll see it's easily doable for an inexpensive weekend escape.

Related: How to Pack in Just A Personal Item Sized Bag 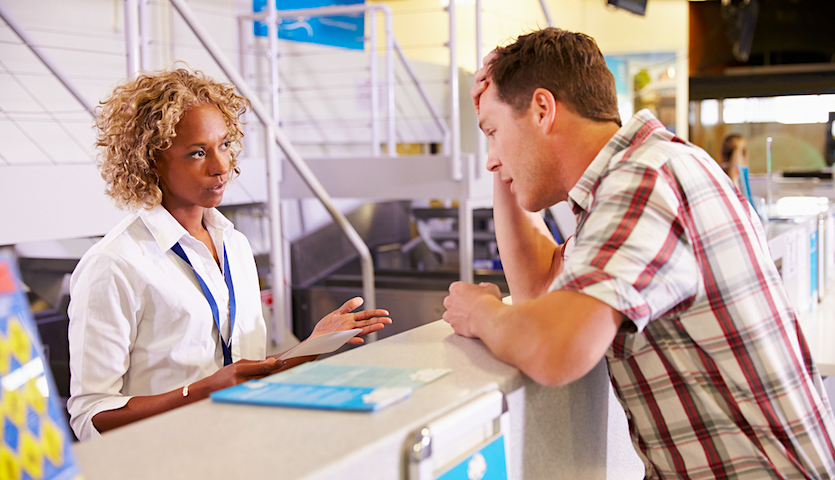 As in the horror movie Scream, don’t pick up the phone. Not only will you be humming along with hold music for a long while, but you'll also be charged a fee just for dialing in. So, what’s the alternative? Book online? Not so fast, some low-cost carriers even charge you for doing all the work and booking by yourself over the internet too. The fee is usually bundled in the final price, so it's not as noticeable, but it's still an annoying surcharge because streamlining ticket sales online saves on company overhead.

And once you pay for that itinerary, don't make the mistake of not printing out your boarding pass before trekking to the terminal. Agents at the airport for carriers like Spirit, Allegiant, and a myriad of international budget-carriers will charge an additional fee to print the document during check-in.

Customers willing to schlep to the airport and purchase a ticket at the counter can sidestep several booking fees and save upwards of 20 dollars each-way on carriers like Spirit, Frontier, and Allegiant. Keep in mind if traveling with baggage, you’ll be on the hook for the “at the airport” costs on same-day departure tickets. But, as a bonus, it's been reported that you might even score free seat assignments with this unconventional method too.

If your ink has run out or you’ve ditched the printer in a more eco-conscious approach, download the airline's app to your phone. While calling the carrier will incur an extra charge, using your phone to display a mobile boarding pass is still free – for now. 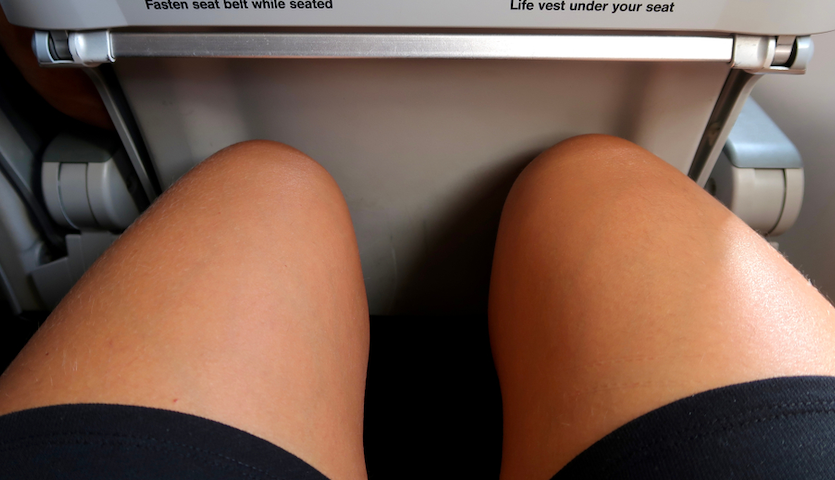 We’ve done the math here on our Guide to U.S. Airlines with the Most and Least Legroom in Economy, and to little shock, low-cost airlines fared the worst. Predicated on a business model to cram as many seats onboard as possible to keep ticket costs down, the real price to pay might be your kneecaps. Featuring 28-29 inches of seat pitch, Allegiant, Spirit, and Frontier all rank the lowest for legroom among U.S. carriers and have stopped “recline rage” among passengers by not allowing seats to slide back full stop.

Unfortunately, in nearly all instances If you value stretching out your legs, you’ll have to stretch out your wallet alongside them. For safety reasons, seats positioned in bulkhead and exit-rows are fitted with extra space allowing for more legroom, and most carriers have allotted a few rows with more pitch padding. But the caveat to nabbing one of these sought-after seats is that you’ll have to pay extra for the privilege. Expect anywhere from $15-50 to pre-pay for a place that provides improved legroom (with Spirit’s Big Front seat being a top option), or go the old-fashioned route and cross your fingers that you get an empty seat beside you for more wiggle room.

No Partners or Quick Connections 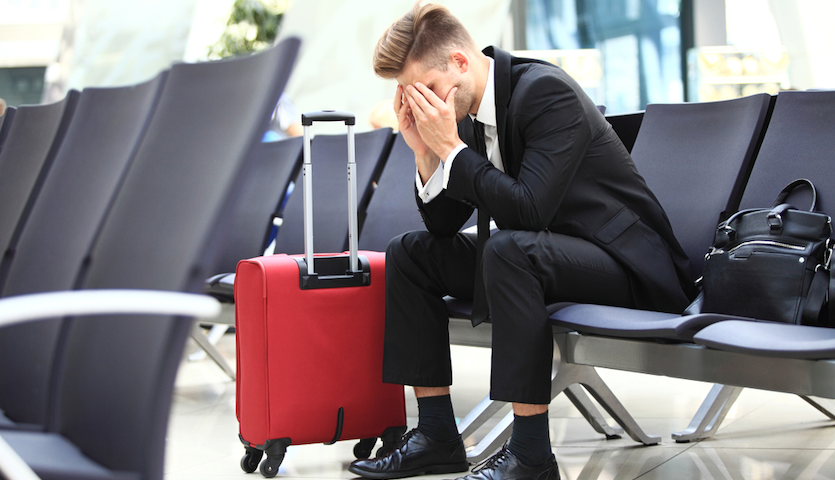 This gotcha might hit you too late in the game, and if it does, it hits hard. The reason why so many no-frills carriers can keep costs down is that they operate on a point-to-point model forgoing traditional spoked systems favorited by legacy carriers. Point-to-point operations reduce travel times and airport dependency, eliminating the need to backtrack to hubs and allowing the freedom to test out new routes without huge commitments. While this might be good for the airlines, it can potentially be a giant headache for passengers. If a flight is delayed or canceled, it often means you might get stranded – sometimes for days.

Markets that only have a few frequencies per week get the brunt, and with most low-cost carriers forgoing interline agreements, there's generally no opportunity to put you on a later or partner flight. If you do have a connecting flight onboard an airline like Frontier and Spirit that happen to use a semi-hubbed-model, you're not in the clear either. Layover times are often long, and in the event of a cancellation or a missed connection, it could be several days until the next scheduled service, depending on your destination.

Without partnerships, booking trips among several airlines is a risky endeavor. For example, if your Sun Country flight arrives late in Minneapolis where you plan on connecting to a separate Delta flight, you might get treated as a no-show. Since there's no interlining between these airlines,  your ticket will be voided if you miss the later flight. Then there’s the additional hassle of checked baggage needing to be collected, re-checked, and probably paid for again. No amount of savings is worth that stress.

You can't really beat this gotcha outright, but planning ahead can prevent a panic attack if a worst-case scenario like a flight cancelation arises. The first and easiest step is to avoid booking itineraries on a low-cost carrier that involves a connection. Aim for nonstop flights to markets that the airline runs several trips to per day. Also, check to see how often the carrier operates flights to your desired destination. If it’s only twice per week, if things go sideways, your trip might get unexpectedly extended. So, keep a backup plan in mind.

If you do choose to walk the tightrope and book two separate tickets, allow ample breathing room between connections and avoid checking baggage. If you're crazy enough to try it internationally, double-check your arrival/departure airports, especially in Europe. Where low-cost carriers like Ryanair and EasyJet regularly operate out of secondary cities that might be hours away from your arrival airport. Just because your ticket cost peanuts, don’t expect to get a bag of them onboard. Another way ultra-low-cost carriers keep prices down is by nixing the amenities you might be used to on other mainline airlines. That means no mini-pretzels, cookies, or cans of soda handed out for free by flight attendants. Sun Country is the standalone still offering limited snacks and drinks onboard free of charge, but in-flight refreshments on Allegiant, Frontier, and Spirit all come with a price tag. And if you're a picky eater, don't expect a wide variety of choices, because items are often unavailable and not catered toward travelers with dietary restrictions.

This situation is the easiest gripe to avoid. Eat before arriving at the airport, pack along some travel snacks, or pony up for the overpriced $12 turkey sandwich from the kiosk next to your gate. If you're known to get hangry when flying, opt for a pre-paid meal on low-cost international carriers or have your credit card handy for that bag of chips when the cart comes by.

Related: 10 Airline Perks That Are Still Free on U.S. Airlines