The West Coast is getting a new nonstop flight to London in 2020. British Airways will expand to its 27th U.S. city with nonstop service from Portland to London starting in June. Late summer intro fares are available for $496 roundtrip and it's even cheaper for fall travel.

The new nonstop service from Portland (PDX) to London (LHR) begins on June 1, 2020, and will be operated by a Boeing 787 Dreamliner 5 times per week on Sundays, Mondays, Wednesdays, Fridays, and Saturdays. Flights depart Portland at 6:50 pm and arrive in London at 12:15 pm the following afternoon. Flights returning to Portland depart London at 3:05 pm and arrive pack in Oregon at 4:55 pm. All times local. The flight from London to Portland clocks in at 10 hours and 20 minutes.

These flight times provide connections throughout Europe and beyond with one of the world's largest flight networks. Oregonians will now be more connected worldwide thanks to this new flight on British Airways and will be able to take advantage of lower prices overall.

The new route will compete directly with Delta and you'll likely see prices drop on all carriers. Sign up for FREE airfare alerts to find out when they do.

New nonstop service begins on June 1, 2020. The intro fare from Portland to London for $496 roundtrip is available within the following date range.

The intro fare is not advertised with an expiration date and prices may change at any moment. Take advantage of a 24-hour risk-free cancelation policy and book now to secure an excellent price while you think about plans.

Economy Basic fares only include a carry-on bag plus one personal item. The first checked piece of luggage will cost $55-60 each-way depending on when you pay. Economy Standard fares include one free checked bag.

Seats will be assigned at random upon check-in for Economy Basic. You may pay a fee to choose a specific seat. Economy Standard fares include your choice of seat for free starting from 24 hours before departure.

Upgrading to the Economy Standard fare will cost an additional $70 each way. Certain travel dates could be more to upgrade. This type of fare will include one free checked bag and seat selection during check-in. British Airways allows ticket changes (fee applies) on both Economy Basic and Economy Standard fares.

As an example, I found flights departing Portland PDX on Monday, August 10, returning from London LHR on August 19, for $496 roundtrip. This is currently much cheaper than any other airline for summer travel! 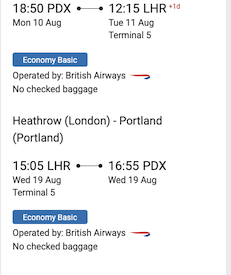