Winter Travel to Florida from $60+ Roundtrip on Major Airlines

Plan your winter break now and book a cheap flight down to sunny Florida. Nonstop flights to airports across the Sunshine State are available for as little as $60 roundtrip on traditional airlines like American, Delta, JetBlue, United, and Southwest.

While you can often find even lower fares on budget airlines like Allegiant, Frontier, Spirit, and Sun Country, you may be willing to pay a little more to fly on a more traditional carrier that won't nickel-and-dime as much as the ultra-low-cost carriers. These fares will all include traditional in-flight service with soft drinks and a light snack included and most (except United) include a full-size carry-on bag.

Cheap Flights to Other Cities in Florida

There are some really great deals to Florida on several routes across the U.S. — especially for travel on Tuesdays and Wednesdays, between January 7 and March 4, 2020.

Check out all of our current finds from your city and all deals to Orlando (MCO), Ft. Lauderdale (FLL), Miami (MIA), Tampa (TPA), Ft. Myers (RSW), West Palm Beach (PBI), and Jacksonville (JAX).

All of these fares include a carry-on bag plus a small personal item except United which only allows for an individual item that fits under the seat in front of you. The first checked bag is $30 each way on all airlines except Southwest. Southwest includes two free checked bags.

Southwest has an open seating policy where you choose your seat as you board the aircraft. On all other airlines, seats will be assigned at random upon check-in for these Basic Economy prices. You may be able to pay a fee to choose a specific seat.

The upgrade to a regular or Main Cabin Economy fare varies greatly depending on the route. Some routes can be upgraded for as little as $30 roundtrip, but we've seen others where the difference in price is around $200. This type of fare includes advanced seat selection and allows ticket changes/upgrades for a fee. The first checked bag fee is the same $30 each way.

Some routes may have similar or slightly lower fares on Allegiant, Frontier, Spirit, or Sun Country but these airlines only include a small personal item at the lowest fares, and you'll likely pay more in the end if you are unable to travel that light.

As an example, I found a flight departing New York LGA on Wednesday, January 8, returning from Miami MIA on Tuesday, January 14, 2020, for $117 roundtrip. 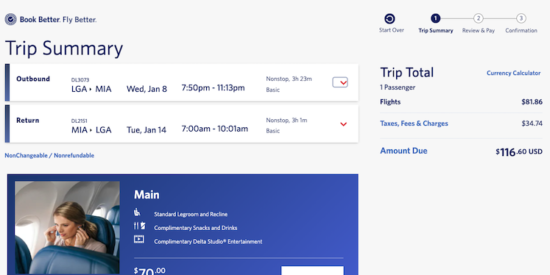