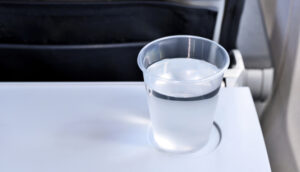 These Airlines Have the Dirtiest Drinking Water

A recent study of U.S. airlines found that many are serving unsafe drinking water that could be making passengers sick.

Conducted by the Hunter College NYC Food Policy Center, the 2019 Airline Water Study looked at 11 major U.S. carriers and 12 regionals, taking into account airline fleet, the presence of E. coli, and any previous violations of the 2011 Aircraft Drinking Water Rule which requires airlines to provide clean water to passengers and crew.

Airlines were rated from 0 to 5, with 5 being the best quality and three being safe enough to drink.

Related:  How to Avoid Getting Sick After Flying

Alaska Airlines and Allegiant tied for number one, while Hawaiian Airlines placed second. The lowest scores belong to JetBlue and Spirit, both with a score of one.

Republic Airways, which operates flights for United, rated a lowly .44 for regional airlines. Compare that to Piedmont, the most popular regional carrier, which scored a 4.33 out of 5.

It's important to note that water from the lavatory faucet can be contaminated as well. Avoid using it to brush your teeth or refill water bottles. You might also consider hand sanitizer instead of washing your hands in the sink.

Related: The Germiest Thing at the Airport You'll Probably Want to Stop Touching

“An aircraft flies to numerous destinations and may pump drinking water into its tanks from various sources at domestic and international locations,” according to the study. “The water quality onboard also depends on the safety of the equipment used to transfer the water, such as water cabinets, trucks, carts, and hoses.”

Curious where your favorite airline falls on the list? Peruse the study in its entirety.