Argentina on Sale from $539+ Roundtrip

We're seeing some phenomenal price drops on flights to Argentina from several hub cities across the U.S. American and Delta are going head-to-head with low fares in the $600 range to Buenos Aires (EZE) and Mendoza (MDZ), and Copa Airlines is offering fares as low as $539 roundtrip.

Since Delta announced it will be purchasing a major stake in LATAM Airlines, there has been a bit of a turf war in South America. Along with this battle for business, Basic Economy has crept it's way deeper into South America and we now see both Delta and American listing Basic Economy bag fee prices for South America flights.

The good news is that these unadvertised sale fares are still the old regular Main Cabin Economy fares and include checked bags. But I would recommend booking these now, because future sales will likely be Basic Economy for the lowest fares.

There may be great deals from or to other cities as well. Have a look at all of our fares to Buenos Aires (EZE) and Mendoza (MDZ).

Standard advanced seat selection is included on all fares. You may pay a fee to choose preferred seating with more legroom or at the front of the aircraft.

As an example, I found seats departing Atlanta ATL on Monday, April 6, returning from Buenos Aires EZE on Tuesday, April 21, for $618 roundtrip. 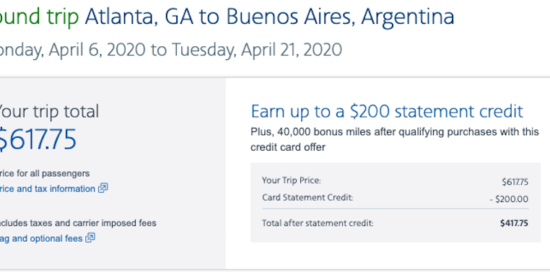