Norwegian Adds New Routes from Chicago and Denver to Europe

Low-cost flights from the U.S. to Europe are expanding with Norwegian adding 3 new routes to its transatlantic network. Starting next spring, look for new flights from Chicago to Paris and from both Chicago and Denver to Rome. Intro fares are as low as $445 roundtrip for nonstop flights.

New Nonstop Service from Chicago and Denver to Rome and Paris

The 3 new routes commence between late March and early June and each will have a limited flight schedule, which varies from month to month. Currently, schedules are loaded on a seasonal basis for travel through October. Norwegian will double its route network from Chicago (ORD) where it currently has service to Barcelona (BCN) and London (LGW). In Denver (DEN), the new Norwegian flight will complement existing service to London (LGW) and Paris (CDG).

Norwegian is known as one of the better budget carriers flying across the Atlantic and includes basically the same amount of baggage as the major carriers do in Basic Economy. Look for other carriers to respond by slashing fares from both Chicago and Denver to Europe.

To find out when prices drop, make sure to sign up for FREE airfare alerts.

Intro fares are valid for spring and/or fall travel. Peak summer travel will have higher pricing.

One-way flights are available for approximately half the price of a roundtrip ticket, which is an amazing deal compared to the competition.

To get these total roundtrip prices, you must book two separate one-way fares in each direction. Book outbound flights in USD and inbound flights in Euros on a foreign version of Norwegian's website.

Norwegian sells a Lowfare+ option, which varies in extra cost. It includes one free checked bag, standard seat selection, and free meals on board. 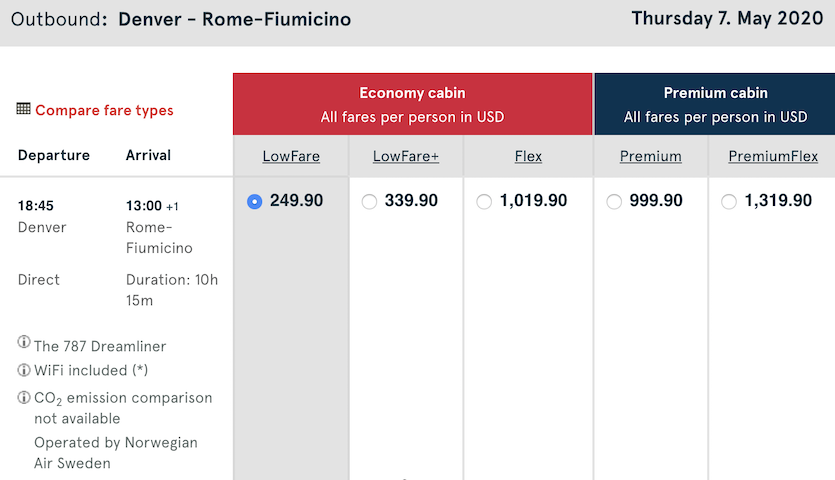