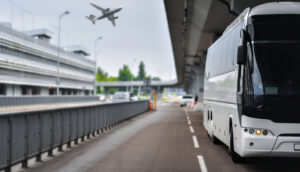 Folks in more remote areas of Minnesota now have the option to book a seamless low-cost travel service with a one-of-kind partnership between Sun Country Airlines and the upstart coach bus company Landline. While the initial offering is limited to two smaller airports in Minnesota, the two companies plan to expand this codeshare service across the upper midwest and beyond.

Reservations are now open for travel starting November 4, 2019, from Duluth (DLH) and Mankato (MKT) to destinations throughout Sun Country's flight network from Minneapolis (MSP). The bus service will act just like a regional flight with check-in counters at the airport and transfers of checked baggage. Landline has been operating its nonstop bus service connecting these airports with Minneapolis (MSP) 5 times per day since June, but passengers have had to book separate tickets and transfer luggage on their own until now.

After checking several routes, it appears that adding the bus service to a Sun Country flight costs an extra $24 each way for Mankato and $34 each way for Duluth. Searching on Landline's site separately, I see fares as low as $9 each way for both airports so you can actually still travel cheaper by booking separate Landline and Sun Country tickets. However, by booking one ticket on Sun Country's site, you'll be protected in case there is a delay. Plus, you'll be able to go directly to the TSA screening once you arrive at MSP and will not need to re-check bags or check-in a second time.

Related: What Are My Rights if My Flight Is Cancelled?

Combine Ground Transport with Flights to Save Money

There are a few other markets around the country that combine ground transportation with a flight. Most notably, United codeshares with Amtrak train service along the northeast corridor connecting cities like Philadelphia and Stamford with Newark Airport (EWR). United also has a codeshare coach bus service in Allentown (ABE). And you'll find these options more prominent in Europe with an extensive train network. Since airlines are reducing the number of small regional jets in favor of newer high capacity airplanes, this will open up more opportunities for services like Landline.

The partnership with an ultra-low-cost carrier is a game-changer since these types of budget carriers don't have frequent service from smaller markets, if at all. If this trial run goes well, look for Landline and Sun Country to expand codeshare service around the country and bring seamless ultra-low-cost travel to more rural areas of the country. For more details on the partnership, check out Sun Country's Q & A page here.

Of course, the same fees will apply and there is an extra charge for anything larger than a small personal item when you book this codeshare service. Landline itself includes one piece of checked bag size luggage if you book a separate ticket, but if you book a codeshare service on one itinerary, you'll be charged the same fees that Sun Country charges upfront. Currently, Sun Country charges a $30 fee each way for either a carry-on bag or a checked bag when purchased online. Only one small personal item is included in the fare.

While Mankato (MKT) airport doesn't currently have any commercial flights, Duluth (DLH) now has flights from all 3 major U.S. carriers American, Delta, and United. We're already seeing lower fares on these major airlines since this announcement was made. And since Sun Country charges extra fees for carry-on bags, you may still find it to be cheaper overall flying on a major carrier out of Duluth. That being said, we're still seeing some excellent prices sold by Sun Country Airlines that these cities haven't seen in the past. And if you can travel super light, you won't find anything cheaper.

These "flights" are not showing up on third-party searches yet, so you'll need to book directly on SunCountry.com to get these fares. Have a look at some of the great travel deals we've found below.

Codeshare service on Sun Country/Landline is bookable for travel starting November 4, 2019. The inventory does not directly match with Sun Country service from MSP, but it is fairly close for most routes.

Some routes do not have daily service and these low fares may only be available on specific dates only. Click on the fare details below for more booking info on each route.

All fares also work in reverse.

These fares only include one small personal item. Carry-on and checked bag fees start at up to $30 each way when booked online.

Since Sun Country's lowest fares only include a small personal item and many routes have limited service, make sure to compare with other airlines, such as Delta and American. These airlines may offer slightly higher fares to match these prices from Duluth and will include at least a standard carry-on bag plus one personal item. United may offer similar fares as well, but its Basic Economy fares include the same amount of luggage as Sun Country. 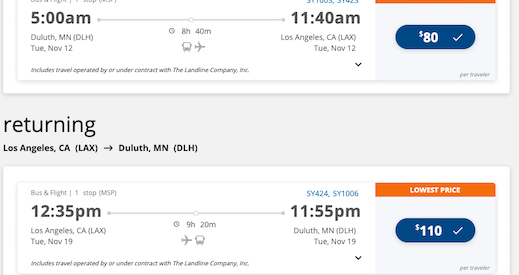