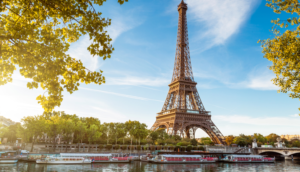 If you hail from the capital of Texas, get excited for a brand new nonstop flight to Europe. Norwegian is expanding its flights out of Austin with new nonstop service to Paris starting in May 2020. This will be the only nonstop service between these two cities and intro fares are as low as $470 roundtrip.

Starting May 6, 2020, Norwegian will fly nonstop between Austin (AUS) and Paris (CDG) on Sundays, Wednesdays, and Fridays. Flights will depart Austin at 4:00 pm and arrive in Paris at 8:15 am local time the following day. Flights will depart Paris at 10:00 am and arrive back in Austin at 2:00 pm local time. The new service will not have any direct competition and will be a welcome addition for residents of Austin looking to fly out to Europe on the cheap.

Norwegian is known as one of the better budget carriers flying across the Atlantic and includes basically the same amount of baggage as the major carriers do in Basic Economy. Look for other carriers to eventually respond by slashing fares on connecting flights from Austin to Europe and sign up for FREE airfare alerts to find out when prices drop.

The intro fare from Austin to Paris for $470 roundtrip is available within the following dates:

One-way flights are only $220, which is an amazing deal compared to the competition.

Norwegian sells a Lowfare+ option, which seems to be an extra $180 roundtrip for this route. It includes one free checked bag, standard seat selection, and free meals on board. 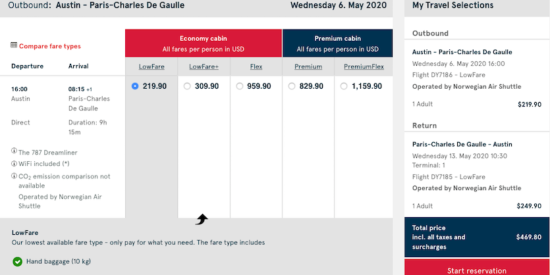