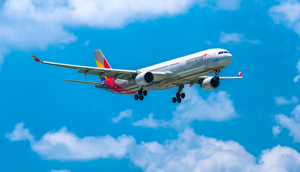 Southeast Asia on Sale: Travel on Asiana Starting at $535 Roundtrip

Fly to several destinations in Southeast Asia in style on 5-star rated Asiana Airlines. Departures to the Philippines, Vietnam, Thailand, and Japan are available starting at just $535 roundtrip.

Travel dates vary slightly by route. In general, departures from the USA are available departing as soon as today through early December, and again from mid-January through May 2020. Return flights from Asia are available through June 2020.

Travel to Asia Sundays through Thursdays, and return from Asia any day of the week, when available.

Peak holiday dates blacked out in December and early January. Most availability can be found in 2020.

There are many more routes on sale as well. Some itineraries may require a long daytime or overnight layover in Seoul (ICN).

Singapore Airlines is currently running a similar sale (through August 31) to many of these destinations and may have cheaper itineraries on some dates.

Some routes may have lower fares on mainland Chinese carriers such as China Eastern, China Southern, Air China, or Xiamen. These carriers often have longer layovers, and most travelers prefer the service on Asiana. Plus, you'll likely find that Asiana's lowest fares are more widely available for travel within this sale period.

As an example, I found seats departing San Francisco SFO on Wednesday, September 25, returning from Manila MNL on Saturday, October 5, 2019, for $535 roundtrip.