Top-rated Singapore Airlines is having a rare sale from 5 of its U.S. gateways to several cities throughout Asia and its 5th freedom routes to Europe. Fares are as low as $489 roundtrip.

I mentioned the incredible fares to Bali when this sale was first released a few weeks ago, but there are plenty of other deals worth mentioning. Luckily, Singapore Airlines decided to keep this sale running for nearly the entire month of August so you can still get a great price on one of the best airlines in the world.

Travel days of the week vary slightly depending on each route, but in general, these fares are available for travel on Mondays, Tuesdays, Wednesdays, and Thursdays, with some weekend travel dates costing $50 more each way.

There is a 2-month maximum stay allowed to get these prices.

There are many more routes on sale as well. Some itineraries may require a long daytime or overnight layover in Singapore (SIN).

These are Economy Lite fares, which require a fee for advanced seat assignments. You may receive a free seat assignment upon check-in or pay a fee to choose a specific seat.

An upgrade to an Economy Standard fare on Singapore Airlines will usually cost around $200 more. This type of fare includes advanced seat assignments, is eligible for upgrades, earns more miles, and has a much lower ticket change fee.

A few routes may have lower fares on mainland Chinese carriers like Xiamen Airlines, China Eastern, China Southern, or Air China, that likely require an overnight connection. However, these are excellent prices for 5-star service on Singapore Airlines. Other Star Alliance partners such as ANA and United may offer better connections and slightly lower fares on a few routes.

As an example, I found seats departing Seattle SEA on Thursday, March 5, returning from Kuala Lumpur KUL on Tuesday, March 17, for $540 roundtrip. 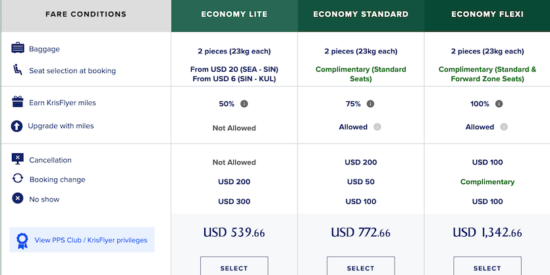