The little airline that could is adding more new destinations to its route map. Look for new Sun Country Airlines flights from Minneapolis (MSP) to both Sarasota (SRQ) and Nassau (NAS) this December with intro fares as low as $157 roundtrip. And earlier this month, Sun Country announced new flights from Portland (PDX) to Los Cabos (SJD), which also begin in December.

Each new route will be operated either once or twice weekly. Currently, there is no other nonstop flight between Minneapolis and Sarasota, which makes this an excellent option for Minnesotans looking to fly directly into this smaller airport along the Gulf of Mexico between Tampa and Ft. Myers.

The new route from Minneapolis to Nassau will compete directly with Delta and nonstop service is currently available from Portland to Los Cabos on Alaska Airlines. Look for prices to drop on all carriers in these new markets for Sun Country and sign up for FREE airfare alerts to find out when they do. (It's already cheaper to fly from Portland to Cabo on several airlines)

Intro fares from Minneapolis must be booked by 11:59 pm CT, September 5, 2019. The fare listed from Portland to Cabo is unadvertised and may jump in price at any time.

Portland to Los Cabos $386 roundtrip - lower on other airlines

Since Sun Country's lowest fares only include a small personal item and these routes have very limited service, make sure to compare with other airlines, such as Delta, American, Alaska, and Southwest. These airlines may offer similar fares to match these new low fares from Sun Country and will include at least a normal carry-on bag plus one personal item. 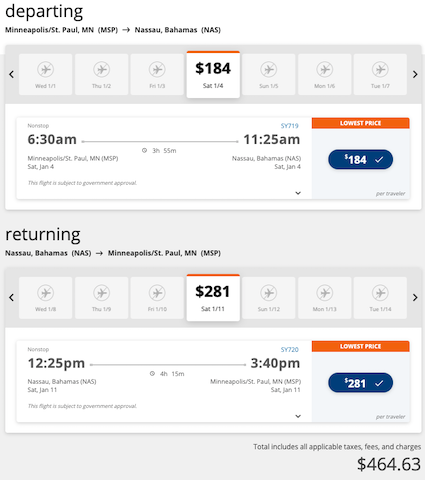