New Flights to Morocco on American Airlines from $611+ Roundtrip

American Airlines has started selling tickets on its new flights to Morocco starting next June. Low intro fares to Casablanca (CMN) are available from nearly everywhere in the U.S. starting from $611 roundtrip.

The new nonstop service will depart from Philadelphia (PHL) at 9:30 pm ET, on Mondays, Thursdays, and Saturdays, starting June 4, 2020. The flight will return from Casablanca (CMN) the following day (Tuesdays, Fridays, and Sundays) and will arrive back in Philly at 3:45 pm ET.

This schedule allows for easy connections from just about anywhere American flies on the outbound flight. Since the return flight gets back later in the afternoon, connections to some cities in the U.S. may require an overnight layover. Intro fares are cheap from pretty much everywhere in the U.S. compared to normal pricing for this busy travel period.

New service begins on June 4, 2020. The cheapest fares are available for travel to Morocco on Mondays, returning from Morocco on a Tuesday or Friday. A one-week minimum stay is required for the low fares.

You may find flights in the fall or winter on a combination of American and Iberia for around $40 more. These flights will likely require an overnight layover in Madrid on the return trip.

This sale is unadvertised, and fares may jump at any moment. Book now to avoid missing out. Try many different booking sites if you are finding prices jumping since inventory is going fast and may be available through another booking engine. And sign up for fare alerts to find out about the next big deal.

Portland, OR to Casablanca $820 roundtrip

This is just a sample of fares, there are much more included in this nationwide sale. For more deals to Morocco, check out our full list of fares to Casablanca (CMN) and Marrakech (RAK).

Upgrading to Main Cabin Economy will cost an additional $120 roundtrip in most cases. This type of fare includes one free checked bag, seat selection, and the ticket will be eligible for upgrades. American allows ticket changes (fee applies) on both Basic Economy and Main Cabin Economy fares for transatlantic flights.

From some larger cities, you'll find lower fares for fall/winter travel on other carriers. However, you might find a more desirable schedule on the new American flights and peak travel in late June rarely sees deals like this so it might be best to book early.

As an example, I found a flight departing Minneapolis MSP on Monday, June 15, returning from Casablanca CMN on Tuesday, June 23, for $640 roundtrip. 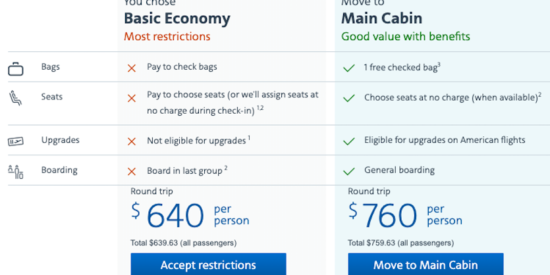