Flights to China from $306+ Roundtrip on U.S. Carriers

Fly to the far east on American carriers for as little as $306 roundtrip. Competition is heating up in the transpacific flight market and fares are dropping to historic lows. Enjoy the savings and experience another world for less than some domestic flights.

All three major U.S. airlines, American, Delta, and United, are offering deals to China from various cities across the U.S. Alaska Airlines, along with partner Hainan Airlines, and China Southern Airlines are also competing with great fares in select markets. And don't forget about Air Canada. Sometimes routing through Canada can save big.

Most routes only require a 3-day minimum stay, but a few may require a full week stay for the low fares. Either way, most travelers will prefer to stay a full week in order to really enjoy the trip after flying that far.

These are mostly the cheapest options on these routes. You may find low prices to other cities in China on some mainland Chinese carriers, but flights might require lengthy stopovers.

For more deals to China, have a look at all of our fares to Beijing (PEK) and Shanghai (PVG).

As an example, I found seats on nonstop flights departing Los Angeles LAX on Friday, October 18, returning from Beijing PEK on Sunday, October 27, for $306 roundtrip. 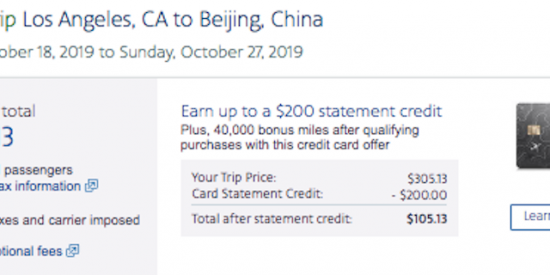