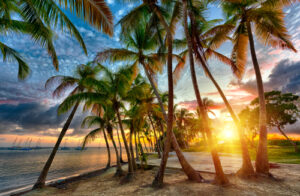 JetBlue just released its late winter and early spring schedule and you can now book JetBlue flights for travel through April 28, 2020. The schedule extension includes new nonstop service to the French Caribbean with nonstop flights from New York to Pointe-A-Pitre, Guadeloupe for $364 roundtrip.

New nonstop service from New York (JFK) to Pointe-A-Pitre, Guadeloupe (PTP) begins on February 1, 2020. The new flight will operate three times per week on Mondays, Wednesdays, and Saturdays. It will depart New York at 7:00 am and arrive in Guadeloupe at 12:21 pm. The flight from Guadeloupe departs Ponite-A-Pitre at 1:40 pm and arrives in New York at 5:25 pm.

These flight times don't make for ideal connections for most of JetBlue's flight network. Connections are possible from red-eye flights landing in New York that depart from the West Coast the night before, but not all of those routes will allow same-day connections on the return flight. Prices are pretty high for connecting flights, but still lower than other airlines.

Currently, there is only limited service between the mainland U.S. or Canada and the island of Guadeloupe. Air Canada and Air Transat both fly from Montreal (YUL) and Air France and American both fly from Miami (MIA). Norwegian used to fly from a few select cities, but has since canceled all of its Caribbean flights from North America. More flight options are available if you first position to a city in the Caribbean such as San Juan (SJU).

The intro fare is available for travel on Mondays and Wednesdays, from February through March.

This Blue fare includes a carry-on bag plus one small personal item. Checked bag fees start at $30 each way when paid at the airport.

JetBlue's Blue Plus fare is $56 more roundtrip, which comes to $420. This will include one piece of checked luggage and is a slightly cheaper option than paying for baggage at the airport. 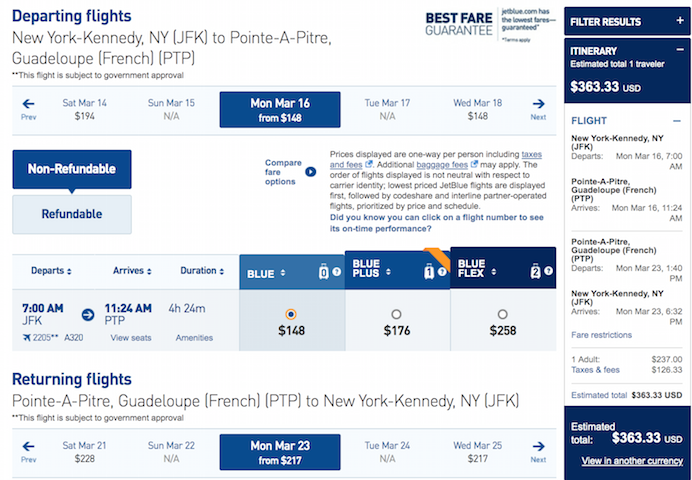