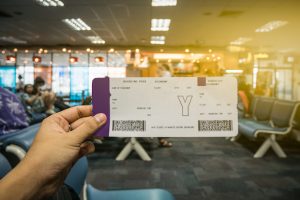 The airline industry claims it’s for security purposes and to "provide quality service," but there’s another more self-serving reason why airlines won’t let you play the name game after you’ve booked a flight.

Why Airlines Won’t Permit Name Changes after Tickets are Issued

It all comes down to speculation, and not in the conjecture sense of the word. In the financial meaning, purchasing an asset with the hopes that it becomes more valuable in the near future. Simply, it’s all about revenue control and a single market system.

Because airfares fluctuate wildly in price, by selling non-transferable tickets airlines can safeguard themselves from private parties and resellers purchasing blocks of the cheapest fare buckets or deeply discounted sale tickets in order to flip them to consumers for more competitive prices closing in on the flight’s departure date.

Before airlines cracked down and began issuing non-transferable tickets, the marketplace ran similarly to today’s current sporting, concert, and theater model where scalpers and ticket consolidators create a secondary market revolving around seat demand. This grey market thwarted attempts from the airlines to hike tickets prices on last-minute bookings as thrifty consumers would turn to the resellers for more favorable fares. Much like tickets to a sporting event, once the game starts (or airplane takes off) the seat’s value to the reseller is just about zilch, incentivizing them to lower the price tag closer to departure in fear eating the cost of the fare they initially shelled out for. That would translate to zero hour savings for some savvy (or procrastinating) travelers.

Airlines take the opposite approach. Knowing that a walk-up or last-minute customers often need to fly on the spot, carriers hold those passengers over a barrel by charging extortionate prices on those close-in fares, recouping revenue on the other seats they’ve previously sold on the aircraft at lower rates. This is a strategy the industry has relied on for decades to ensure they can operate a flight without falling into the red. By putting the kibosh on name switches after an itinerary is ticketed, speculators were out of business, allowing for the airlines themselves to exclusively dictate their seat values.

While name change guidelines may seem unfair to passengers stuck in situations where transferring a ticket would bail them out of a jam, overall these policies are upheld to create a transparent marketplace. Even if it seems like that market is tilted towards the airline’s favor, without these parameters in place, finding cheap flights could be potentially more stressful. Imagine having to compete with speculator’s bots buying up all the cheap fares the day they’re released. Now that’s truly unfair.

Money’s the name of the game in the airline industry, and much like your booking info, it’s not going to budge on changing.