Major Expansion on Swoop: 14 New Nonstop Routes to U.S. and Mexico from $182 Roundtrip

Get ready for cheap flights to some fun in the sun! Swoop has opened up its winter schedule and is adding 14 new nonstop routes from Canada to the U.S. and Mexico. Fares from Canada are as low as $266 CAD roundtrip and $182 USD roundtrip from the U.S.

Swoop is adding one new city in this expansion. Los Cabos (SJD) will be the 4th destination in Mexico that Swoop will serve. Other Mexican cities on Swoop's route map include Cancun (CUN), Mazatlan (MZT), and Puerto Vallarta (PVR).

Swoop Adds 14 New Flights from Canada to U.S. and Mexico

Swoop appears to be picking up the slack after Flair Air canceled its flights to the U.S. earlier this year. The new routes to Florida, Vegas, Arizona, and Mexico will compete directly with WestJet on a few routes and Swoop will be the only nonstop carrier on others.

These popular destinations for Canadians will likely be cheaper to get to on other carriers due to the added competition. Sign up for airfare alerts to find out when prices drop.

Flights are operated on specific days of the week for each route. Intro fares are valid from start of service through April. Intro fares from Florida are only available through December.

There are no blackout dates listed so some of these fares may be available for holiday travel, though we're seeing the low fares go fast for peak travel dates.

New Nonstop Service on Swoop Between Canada and U.S./Mexico

Orlando to London, ON $182 USD roundtrip

Prices were found on Swoop's website and converted to USD for comparison purposes on Airfarewatchdog. You may or may not find that you need to book two separate one-way fares in each direction in order to get the lowest price.

These fares only include one small personal item. Checked bag and carry-on bag fees start at $40-$46 CAD each way when purchased during the initial booking. 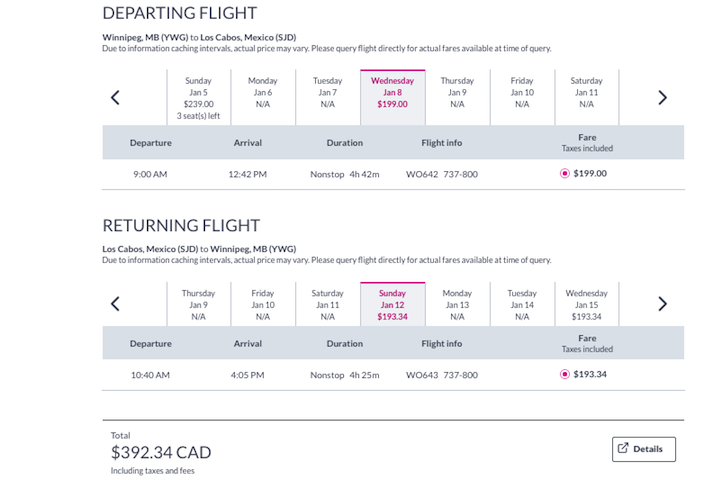