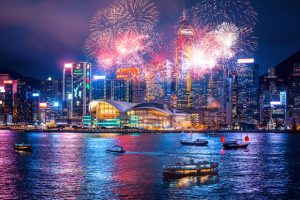 Air Canada and StarAlliance partner United are secretly sneaking out an unadvertised fare sale to Hong Kong this week. We noticed the fares from the West Coast yesterday, but today we're seeing some East Coast airports beginning to get in on the action. Roundtrip flights from California are starting at $385, and fares from the East Coast are hovering around $550 roundtrip, these are hundreds of dollars less than the going rate!

Travel on Mondays, Tuesdays, Wednesdays, and Thursdays. Some itineraries may have overnight layovers in a connecting city, which means you could depart on a Sunday as long as you cross the Pacific on a Monday.

The lowest fares on Air Canada are easiest to find in the fall from early September through November, then again from mid-January through March 2020. United flights are available in late August through November.

East Coast cities may require two connections on the return leg of the itinerary.

These won't last! Book now! You'll have 24 hours to think about your plans with a risk-free cancellation policy.

If your city isn't listed above, that doesn't mean it isn't marked down. Have a look at all of today's finds to Hong Kong (HKG) to see what's available from your local airport.

These fares include standard carry-on baggage and one piece of checked luggage included.

On most routes, these are the lowest listed prices you may find a fare from the East Coast with only one connection on United for around $100-130 more than what Air Canada is charging for the two connection returns.

As an example, I found a flight departing Los Angeles LAX on Tuesday, October 1, returning from Hong Kong HKG on Monday, October 14, for $385 roundtrip.