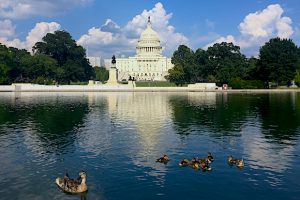 Unadvertised Fare War on American and United from $111+ Roundtrip

Here's a good old fashioned fare war between American and United with big price drops between select cities across the nation. There are some especially good cross-country deals between Washington D.C. and California along with a slew of other routes that rarely go on sale. Fares start as low as $111 roundtrip.

Rules and restrictions vary by route. Available travel dates are generally scattered throughout the year with the most availability for fall and/or winter travel, excluding peak holidays. A few routes will have some scattered spring travel dates available and only a couple routes have availability during peak summer travel months. Click on the fare details below for more info.

In general, it should cost $60 more roundtrip for an upgrade to a standard Economy fare. This will include a full-size carry-on bag on United. It will also include advanced seat selection and allow for ticket changes/upgrades on both American and United. A checked bag is the same $30 fee each way.

As an example, I found a flight on American departing Washington DCA on Sunday, September 1, returning from San Diego SAN on Saturday, September 7, for $133 roundtrip. 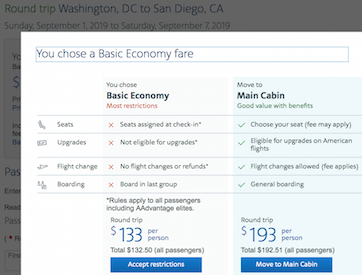