Which Dallas Area Airport is Right for You: DFW or DAL?

Dallas could arguably be considered the most important city in the U.S. aviation industry. With each airline looking to reign supreme on its hometown turf, these two goliaths have essentially laid claim to the area’s pair of commercial airports. So which Dallas airport is right for you?

Strategically positioned Dallas-Fort Worth (DFW) is the busiest of the pair, while Dallas Love Field (DAL) conveniently closer to downtown but has fewer flight options. Each has its benefits and shortcomings, and you don’t want to trip up your Texas two-step by choosing the wrong airport in Dallas. Depending on where you plan on hanging your ten-gallon hat here’s a handy guide breaking down Big D’s two airports in terms of location, transportation, and airline offerings. 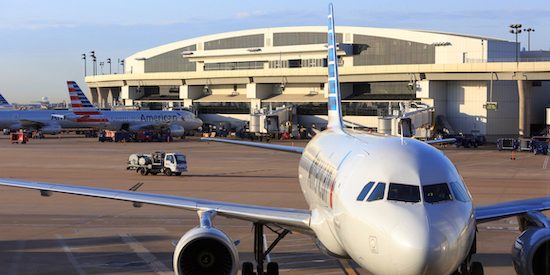 Bigger than the island of Manhattan, Dallas/Fort Worth International Airport (DFW) is one of the largest airports in the United States in size and flight volume. Nestled between both metro areas of Dallas and Fort Worth, DFW technically a city in itself serves as the region’s primary international airport.

As the hub for American Airlines and cargo companies UPS and Ameriflight, DFW ranks fourth busiest statistically in airplane traffic in the world. With all this air traffic comes the usual headaches, as DFW trailed behind Chicago O’Hare as the second worst airports for delays in the States with 75,600 disrupted flights in 2018.

On the flip side, the large air volume that routes through DFW's five terminals provide over 200 nonstop destinations for travelers utilizing the North Texas airport. As the largest tenant at the airport, American Airlines holds a roughly 68% market share, but ultra-low-cost carriers like Spirit, Frontier, and Sun Country Airlines continue to add service, chipping away at American’s grip on passenger loads. This has benefited customers as direct competition on routes by the ULCC has significantly driven down domestic fare prices to/from DFW.

For international itineraries, DFW is the only game in town. Due to its location in the center of the country, DFW’s international offerings tend to lean heavily toward Central and South American destinations. Nonstops to Europe, Asia, the Middle East, and Australia are available, but at a more limited capacity compared to coastal airports. This also means that fares to foreign destinations skew high departing Dallas-Fort Worth due to a lack of competition. However, as the largest hub for American, rivals Delta and United will occasionally target DFW in fare wars undercutting ticket prices on routes to the airport.

DFW is a hub for which airlines?

How much does it cost to get from DFW to downtown Dallas?

Dallas/Fort Worth International’s location makes it an ideal airport for those who are continuing onward by car to Arlington, Fort Worth, or any other destination west or southwest of the airport. Its main thoroughfare International Parkway bisects the airport down the middle with exits to all terminals, hotels, and parking lots. Surrounded by major highways via International Parkway, DFW is easily accessible by road in nearly all directions.

For those who prefer public transportation, Dallas Area Rapid Transit (DART) provides the most cost-effective way to reach downtown. Light rail service on the Orange Line located outside of Terminal A connects the airport and downtown in just under an hour. One-way AM/PM DART fares to central Dallas cost $3.00 and can be purchased at the station. (Ongoing weekend rail works are going on through September 2019, so make sure to double check service if you are traveling on Saturday or Sunday.)

While many travelers to DFW opt for car rentals, those who want to avoid driving can rely on rideshare apps like Lyft and Uber to connect them to downtown at somewhat reasonable rates. Fares to the city center range from $33 to $38 depending on destination and traffic. If you’re more accustomed to taking regular taxis, flat rates to downtown Dallas are fixed at $45. Expect a roughly 30-minute ride to the city center if traffic is at a normal flow.

If you’ve rented a car and are looking for directions back to the airport, Dallas /Fort Worth International has its own ZIP code of 75261 and is located at 2400 Aviation Drive, DFW Airport TX.

As Dallas’s other airport, Love Field (DAL) often gets overlooked as a viable option for traveler heading to North Texas and its surroundings. Namesake aside, there is a lot to love about DAL and location, and recent upgrade plays a big part. Situated only 6 miles northwest of downtown Dallas, it's easily the most convenient airport of the pair for travelers visiting the city center and points east. On top of that, DAL received a recent facelift, modernizing the airport with a new terminal, restaurants, shops, and baggage claim area.

Despite Love Field’s label as just a focus city for Southwest, the airline's presence at the airport proves otherwise. With a near monopoly on gates at the airport, Southwest accounts for over 90% of daily traffic at DAL. Inherited in its merger with Virgin America, Alaska Airlines is the second biggest tenant at the airport offering service to West Coast cities from its two gates. Delta eeks in with its daily shuttle from its hub in Atlanta to DAL, but for all intents and purposes Love Field is Southwest’s personal playground regarding commercial service to/from the airport.

So what does that mean for the average traveler? Simple, if you're a fan of flying Southwest, then Dallas Love Field is the right choice for you. The airline's generous baggage policy and competitive fares coupled with DAL's desirable location make this go-to choice for visiting the Big D.

Cheap fares and convenient location are great perks for DAL, but the airport has a handful of shortcomings too. As solely a domestic airport, international connections aren’t available, leaving DFW as the lone option for nonstop flights overseas. While the airport is connected by public transportation, it requires a bus to train shuttle, which isn’t as seamless as DFW’s rail link.

DAL is a hub for which airlines?

How much does it cost to get from DAL to downtown Dallas?

Love Field’s proximity to downtown Dallas positions it as the best choice for flyers that want to reach the city center in record time at reasonable prices. As a smaller operation, finding taxis, shared rides, or driving to the city center is generally an easier task than at bustling DFW and costs and time is usually halved.

Travelers looking take public transportation into town from DAL can follow signs in arrivals to the DART’s bus service on the Love Link Route 524. Bus service connects the airport with the Inwood/Love Field Station’s Green and Orange rail lines. Love Link 524 service to the station is free, but rail tickets connecting onward to downtown Dallas will cost $3 for an AM/PM pass and $2 for a midday pass for travel between 9:30 am-2:30 pm.

Lyft and Uber prices should run about $15-18 one-way from Love Field to destinations around the Giant Eyeball in downtown Dallas. Similarly to DFW, taxis charge a flat rate fee to/from the airport, with a fare of $21 being the cost between central Dallas and DAL. Average travel time for either option should be around 15-20 minutes from outside of baggage claim to your downtown destination. 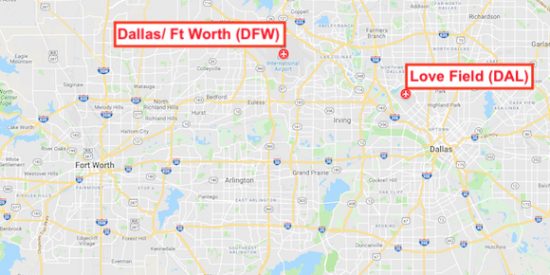