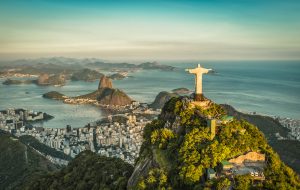 On Monday, the Brazilian government announced plans to drop visa fees for tourists from the United States, Canada, Japan, and Australia. Once a whopping $160 for Americans, the visa fee dropped to $40 last year as Brazil introduced online e-visa applications.

The announcement coincided with Brazilian president Jair Bolsonaro’s trip to Washington D.C., where he met with Donald Trump for the first time.

Feel inspired to make the trip? Peruse our most recent fare listings for Rio, Sao Paulo, Brasilia, and Belo Horizonte.

Finally! Train Service to LAX Is Officially in the Works

Anyone who has ever been stuck in the moat of traffic that regularly encircles LAX will be pleased to know that construction has officially begun on an automated people mover, scheduled to open in 2023. The shuttle will run between terminals and connect with the Crenshaw/LAX station of the LA Metro. Service will run every two minutes with room for up to 200 passengers across four cars.

If you happen to fall in the Venn diagram sweet spot of trivia nerd and person in need of a free place to stay in Moscow, the Trivial Pursuit Hotel has a deal for you. Win a 2-day stay and other perks by correctly answering a series of trivia questions before arrival. Careful, though. Miss too many questions and you’ll find your bed swapped out for a dinky prison cot. Good luck!

The World’s Most Expensive Cities - and the Cheapest!

Budget travelers plotting their next outing may want to first consult this recent survey of the world’s most expensive—and cheapest—cities. This year has three cities tied for the number one spot: Paris, Singapore, and Hong Kong. Of U.S. cities to make the list, big surprise that New York ranks 7th, followed by Los Angeles at 10.

Meanwhile, the cheapest cities on the list are Caracas at number 1, followed by Damascus at 2, and Tashkent (that’s Uzbekistan, btw) coming in 3rd.

The more the world learns regarding the two Max 8 crashes, the worse it looks for Boeing, as well as the FAA. A particular safety sensor could have alerted pilots to the issue that resulted in the crash of both aircraft, but the sensor is not standard in the 737 Max, and, in fact, Boeing charges extra to install them.

Now there are questions being raised regarding the safety approval process for the aircraft, which is now being investigated by the FBI.

From the 737 Max/FAA debacle to ongoing issues with toxic flight attendant uniforms and harmful 'bleed air' in the cabin, is the airline industry in a race to the bottom?

Win a Personal Guided Tour of the Happiest Nation on Earth

According to the most recent United Nations report, Finland is the world’s happiest nation for the second year in a row. What makes Finns so happy? Tuition-free universities and access to health care probably helps, but they’ll tell you it has to do with Finland’s natural beauty, of which they’ll gladly give you a personally escorted tour. Test your own personal happiness and enter to win at RentaFinn.com/en.

Intro image by marchello74 via Shutterstock