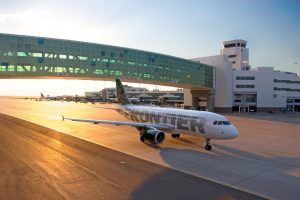 In a press release, Senior Vice President Daniel Shurz stated, "With this announcement, Frontier has now announced 44 new routes for 2019 all across the USA." This also includes new service starting this spring that was announced last year.

This announcement sees Frontier returning to its typical strategy of introducing nonstop flights in underserved markets. In Mobile, Frontier made an interesting choice to fly to/from Mobile Downtown Airport (BFM) instead of Mobile Regional Airport (MOB), where all other major airlines fly. The downtown airport is only 3 miles from the central business district and Frontier's flights to/from Chicago (ORD) and Denver (DEN) will be the first major commercial service for the small airport.

These newly announced routes begin service in either late April or May and are operated on select days each week. I've included which days of the week Frontier will fly each route. Routes to/from Denver have intro fares for travel on Tuesdays, Wednesdays, and Saturdays, depending on days of service, through mid-June, and are advertised to expire tonight, January 23, 2019.

Fares to/from Branson (BKG), Cleveland (CLE), and Nashville (BNA) that were announced last week have unadvertised low fares that may be available for travel through summer.

New nonstop service on Frontier Airlines Starting in May

These fares all work in reverse as well. Keep in mind that Frontier charges extra for any bags larger than a personal item (small backpack, briefcase, large purse, etc.). Pack super light to get the lowest price. Checked bag fees start at $25-$30 each way. Larger carry-on bag fees start at $30-$35 each way.

A few of these routes had been served by Frontier in the past, but most are brand new nonstop flights. The flights to/from Denver should also allow for some low-cost connections to/from cities on the west coast. Sign up for fare alerts to find out about promo code sales and super low flash fares.

If you are unfamiliar with Frontier Airlines and how the airline differs from other carriers, make sure to read Everything You Need to Know Before You Fly Frontier.