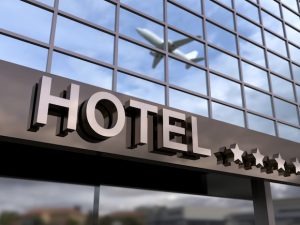 How I Got A Free Hotel Stay from My Airline

Sometimes a fantastic fare comes with a hitch, and often it’s in the form of an extended or overnight layover. Luckily for travels that find themselves in that predicament, many international airlines will help out by providing free transit accommodation.

My Step-by-Step Experience on Redeeming A Free Transit Hotel

On a recent trip from Los Angeles (LAX) to Perth (PER), I found myself in that same situation. I only needed a one-way flight to Australia (I had an award ticket booked for my return), and nearly every fare I could find for my travel window was well over the $1,000 mark. But there was one lone standout. China Southern was offering a one-way ticket for nearly $350 less than everyone else and for the dates I needed. The catch? A 22-hour extended layover in its hub of Guangzhou (CAN), China.

While a 22-hour stopover sandwiched between back-to-back 12-hour flights makes for an epically long travel weekend, I figured the price was right, and I'd get to visit a new city along the way to break up the trip.

China Southern is one of the few airlines that actively promote their free accommodation program right on their homepage. Although the site is a bit clunky and the layout can get confusing, all the information on how its transit services work can be found with a little digging. Including the list of the 53 applicable countries that are eligible for 72-hour visa-free transit on international connections through major Chinese airports.

Anyone with a layover longer than 8 hours can take advantage of China Southern’s offer of free accommodation on arrival. The higher the class you fly, the higher star rating of hotel you’ll be offered, but, for many travelers like me, a clean room plus a hot shower will suffice.

Once ticketed, I was able to access my itinerary online and choose from a rather long list of available hotel options. With nearly a full day scheduled between my connecting flights, I decided to pick a hotel near the city center to explore some sites. However, my plans were dashed when China Southern restructured their schedule a few months before my takeoff, bumping my departure from Guangzhou (CAN) to Perth (PER) up by 14 hours. That nixed my plans on heading into the city, but with my new 8-hour gap I still fell in the sweet spot for a free hotel stay.

My flight touched down in Guangzhou at roughly 6 am local time, and with my bag already checked through to Perth, I didn't have to worry about picking it up at baggage claim. China Southern does an excellent job at signage and with agents to help guide you to your next connection or onward to your free-transit accommodation.

Directed to the waiting area for the visa on arrival processing, I showed my connecting boarding pass to a somewhat surly lady and was told that it was an hour-or-two wait and handed a short entry form to fill out. After filling out the form and handing over my passport, I was given a number (17) and told to sit until it was called. The waiting area had new-ish benches and free refreshments including soda, water, mints, and a few other snacks. The waiting game wasn't as long as expected and my number was called after about 35 minutes. I was handed a map to the desk where I could choose my hotel, given back my documents, and pointed toward the customs line with the group of about 15 others waiting to clear immigration. This all tacked on an additional 25 minutes.

With my shortened layover time due to the visa-wait and general exhaustion, I asked the lady at the counter which hotel was the closest to the airport. She handed me a tablet loaded with pictures of the most popular hotel options nearby. Not wanting to spend more time scrolling she mentioned that the Holiday Inn Express was a good choice and only 15 minutes away. After choosing, she gave me a sticker to put on my shirt and told me to have a seat over to the side. A couple of minutes later a man took a few other passengers and me who chose the Holiday Inn to the shuttle bus, and we were off to the hotel.

From touchdown to arriving at the hotel, the whole process took about an hour and forty minutes and left me with about 4 hours at the hotel before I needed to head back to the airport.

As an airport hotel accustomed to an influx of passengers arriving at all time, the Holiday Inn Express Guangzhou Baiyun proved a good choice. Although I wouldn't consider it flashy by any means, the check-in was seamless, and a room was ready when I arrived at just before 8 am. At the check-in desk, there was a list of shuttle times departing back to the airport which left about every half-hour and the noon departure gave me a nice 4-hour stretch away from the airport.

Breakfast is included in many of the hotel offerings, and there was a standard buffet style mix of both Western and Chinese options with the create-your-own ramen bar being the standout.

I made sure to grab a smoke-free room and, although a bit dated, it was clean and tidy. Between eating, showering up, and napping, my room served as the respite I needed from the chaos of a busy terminal. That feeling was only further reinforced as I returned to the airport and saw groups of people trying to catch some shut-eye on the uncomfortable airport benches as I walked to my gate refreshed.

If you are on the fence about purchasing a flight with a long layover, look into the carrier’s free-accommodation options. You can see a full list here.

In my experience, I think it was completely worth taking advantage of and look forward to doing so again in the future. Not only do you get a nice quiet place to yourself but you get a shower and a free meal thrown in to boot. All away from the noise of the terminal. On longer layovers use it as a base to store your belongings and explore a new city on the way to your final destination.

With airlines charging extra for bags, seat selection, and ticket changes, it’s nice to see that several airlines still offer some free amenities with free transit accommodation being one of the best perks out there.