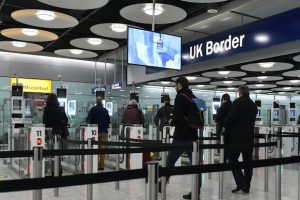 UK Arrivals Will Soon Be Even Easier for Americans and Canadians. Here’s Why

The British may take pride in their queuing abilities, but for travelers from elsewhere in the world? Not so much. Those epically long immigration lines on arrival at UK airports are soon to be history.

UK ePassport Gates Extended to Passengers from Seven Countries in 2019

Following up on the delivery on the annual Budget to Parliament, Chancellor Phillip Hammond announced that travelers from nations outside the EU would be able to start using ePassport gates beginning in the summer of 2019. Under pressure from airport executives and post Brexit uncertainties, this announcement will give e-gate privileges to passport holders from these approved countries in hopes to cut down on ever growing UK Border lines. Some of which clocked over two hours wait times this past summer at key airports like London’s Heathrow and Gatwick, severely slowing down the welcoming process to the isles.

The ePassport gates, which are currently accessible only for UK, EU, EEA, and Swiss biometric passport holders, will now extend to travelers from the following countries in mid-2019:

The use of the gates will permit arriving passengers to breeze through the arrivals process without having to see a dedicated UK Border Force agent to check their documents or the need to fill out a landing card. When initially announced, South Korea and Singapore were omitted from the list of eligible countries but have been subsequently included in the plans. Home Secretary Sajid Javid reiterated a previous statement from Hammond that “The UK is absolutely open for business from the rest of the world and as part of that we are improving the experience for travellers coming into the UK."

When the UK flips on the open sign in 2019, about 6.5 million passengers per year from the added countries should be able to take advantage of the new process. Nearly 4 million of those passengers will arrive from the U.S., which provides the UK with its second largest influx of visitors slightly behind France. Roughly 1 million Canadians visit the United Kingdom annually.

With Brexit looming by the end of March 2019, and a cloud of uncertainty following how travel regulations will be ironed out, much of this comes as a proactive and political measure by the British Government to ensure that visitors and investors will continue to be drawn to the country.

As for now, there has been no mention of the ePassport gates being rescinded to holders of EU, EEA, and Swiss passports. But there is still a lot to be ironed out, and while the Brexit date draws closer, it looks like the lanes will still be available to EU citizens. As the UK's primary trade and business markets, it would only make sense to allow EU passengers access to the gates. However, this situation may change if the EU restricts its open travel parameters for UK citizens.

It is worth noting that ePassport gates are available for nationals that are 18 years or older. Passengers that fall into the 12 to 17-year-old age bracket will only be able to access the gates if accompanied by an adult. Families traveling with children 11 and under will have to be processed through the traditional immigration formalities.

For discount deals departing the British Isles make sure to have a look at our dedicated UK page:

Header image by 1000 Words via shutterstock.com