We have a new, yet familiar titleholder claiming the world’s longest nonstop flight. After abdicating the throne for the last five years, Singapore Airlines re-launched its Singapore (SIN) to Newark (EWR) nonstop with a brand new A350-900ULR (ultra long range) Airbus. The new Airbus range allows Singapore to resume the 9,534-mile and roughly 18 hours and 30 minutes (westward) epic long haul on October 11, 2018. Covering just a tad over 38% of the world's circumference, it’s the closest you’ll get to literally flying halfway around the world.

While the idea of sitting on an airplane for over 18 hours seems like a nightmare to many travelers, the steady launches of these marathon routes prove there is a growing market for them, with this year, in particular, providing quite a shake-up to the list of ultra-long-range routes.

United kicked things off in January when the carrier flew its inaugural Houston (IAH) to Sydney (SYD) flight. This will soon be the longest route offered by a U.S.-based airline, after United nixes its Los Angeles (LAX) to Singapore (SIN) nonstop flight in favor of adding a second daily flight on the route via San Francisco (SFO). In March, Qantas launched its nonstop service from Perth (PER) to London (LHR), the first ever nonstop commercial flight linking the U.K. and Australia, at a whopping 9,010 miles.

Things quieted down over the summer, while Singapore Airlines eagerly awaited the delivery of its A350-900 ULR aircraft, ushering in “a new chapter in nonstop air travel” according to Tom Enders, the CEO of Airbus. The first was received last month, permitting the airline to reclaim the top spot for the world’s longest flight on the scheduled Singapore (SIN) to Newark (EWR) service. Subsequent deliveries of the A350 to Singapore will serve two other destinations on the top 10 longest list­— Los Angeles (LAX) and San Francisco (SFO). Singapore Airlines will claim the fifth spot on the longest list after United drops its LAX to SIN route as of October 27, 2018.

This October continues to be a busy month, as Philippine Airlines will also use an A350-900 variant to break into the top 10 with its nonstop service from Manila (MNL) to New York (JFK). Once this route takes flight on October 29, the top 10 list should be solidified for quite a while as no other airport pairs are scheduled to bump the following from the top spots.

(Delta has announced plans to offer a nonstop flight from the U.S. to Mumbai (BOM), but the origin airport and start date have yet to be revealed. If departing from Atlanta (ATL) the 8,510-mile flight would register at ninth).

Since no flight paths are precisely the same, factors such as favorable winds, severe weather, and circumventing no-fly zones can all add to the final flight distance. Therefore, calculating exact flight distances can be tricky. To avoid confusion over which flight is the longest, the most common way to calculate the flight distance is to use the Great Circle Mapper. Generating the distance between the departure and arrival airports down to the mile, the Great Circle Mapper is widely regarded as the best tool for calculating nonstop flight lengths. By the end of October 2018, the list of the world’s longest nonstop commercial flights by distance will read as follows: See our fare deals to Newark (EWR) and Singapore (SIN) from all over the US and Canada. 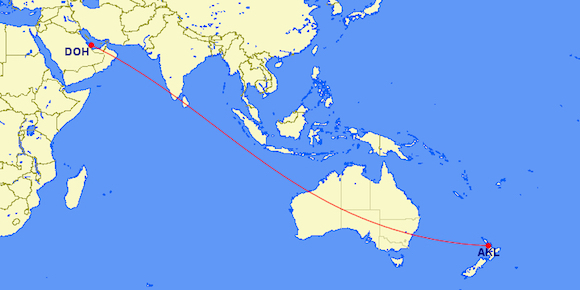 See our fare deals to Auckland (AKL) and Doha (DOH) from all over the US and Canada. See our fare deals to Perth (PER) and London (LHR) from all over the US and Canada. See our fare deals to Auckland (AKL) and Dubai (DXB) from all over the US and Canada. See our fare deals to Los Angeles (LAX) and Singapore (SIN) from all over the US and Canada. See our fare deals to Houston (IAH) and Sydney (SYD) from all over the US and Canada. See our fare deals to Dallas (DFW) and Sydney (SYD) from all over the US and Canada. See our fare deals to New York (JFK) and Manila (MNL) from all over the US and Canada. See our fare deals to San Francisco (SFO) and Singapore (SIN) from all over the US and Canada. See our fare deals to Johannesburg (JNB) and Atlanta (ATL) from all over the US and Canada.

The Future of Marathon Nonstop Flights

As you can see, the increased range of the new fuel-efficient aircraft like the A350 and 787 have opened up more opportunities for carriers to add these ultra-long-haul flights to their route maps. With the exception of the Johannesburg (JNB) to Atlanta (ATL) route all the current top 10 longest flights have been launched within the last four years, and five out the ten took to the sky just this year.

Will we see the first 10,000+ mile commercial flight in the near future? Most likely, if Qantas gets its way with the holy grail of ultra-long-haul routes, Sydney (SYD) to London (LHR). The Australian-flag carrier has issued a challenge to manufacturers Airbus and Boeing to build a viable option for the route by 2022, and they'd promise to order the aircraft that can serve this once unthinkable nonstop option. If successful and economically sound, these new state of the art planes could connect any two major airports on earth with one single boarding pass.

Header image by Brian A Jackson via shutterstock.com