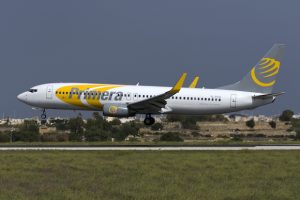 Effective at midnight last night on Monday, October 1, the European based airline is no longer in the air and headed for bankruptcy. After 14-years of operations, the airline bit off more than it could chew by introducing transatlantic routes earlier this year.

Touting $99 fares across the Atlantic, sometimes as low as $63 one-way, Primera's flight deals sometimes seemed too good to be true. Primera struggled to fill seats and airplane woes put the airline in a financial mess. Offering rock-bottom no-frills prices can work for some airlines, but Primera’s lack of reliable aircraft and an increase in fuel costs ultimately led to the decision to cease operations.

Primera had a history of being unreliable and canceling flights, including scrapping Birmingham, UK (BHX) flights entirely after months of accepting bookings, leaving many customers in the lurch. And again, thousands of Primera's passengers are now left stranded with no recourse other than to rebook on another airline or to find alternative travel plans, at their own expense.

For customers hoping to get their money back (I count myself among you as I had an upcoming flight on Primera later this month), it's unclear how refunds will be processed at the moment. The defunct airline claims that it will provide updated information on its website in the coming days. But with its abrupt end and the fact that they are no longer accept phone calls or emails, it’s recommended that you deal directly with your credit card issuer for reimbursement.

Many Primera flights from Europe heading westward to the U.S. had to make unannounced fuel stops in Iceland because they couldn't clear the full journey on one tank, despite being sold as nonstop flights. Just last month, Primera expanded to four new destinations in Europe. The move was most likely meant to show growth and an increased cash flow to investors.

The aviation marketplace is a tough one, and selling tickets on flights you most likely will never service is a short-sighted business model. This is the latest lesson for new airlines trying to crack the transatlantic market and also for passengers now stranded.