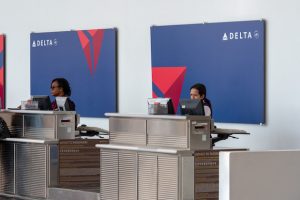 The next domino has fallen. As I assumed, once JetBlue raised their domestic first checked baggage fee up from $25 one-way to $30, it would set the bar as the new standard price across the industry. It only took fee-happy United less than a week to fall in line with the new price structure. But it looks like Delta waited a few extra weeks to get a read on the backlash before playing monkey-see-monkey-do.

In the copy-cat airline industry, standing out from the crowd no longer is seen as a benefit and missing out on extra “ancillary revenue” doesn’t impress the investors one bit. So Delta, the country’s second-largest carrier, quietly raised their baggage fees yesterday to match JetBlue and United with five-dollar increases tacked on to the first and second checked bag rates. First is now $30 one-way, and the second piece is now $40 one-way. Updates can be viewed on our handy baggage fee chart here.

Many pundits questioned whether other legacy carriers would match United’s hike, or if the plan would backfire and put Chicago-based airline at a competitive disadvantage amongst rivals Delta and American. Now at least one of those questions is answered, leaving only American as the last of the major three with $25 one-way bag fees on domestic flights.

It should be noted that Alaska and Hawaiian both still charge $25 for the first checked bag, at least for now.

These days, it may make more sense to consider Southwest, especially as they add perks like in-flight messaging without finding new ways to charge you more. Southwest also generously allows two free-checked bags.

To avoid these recent increases in bag fees, you can apply for an airline co-branded credit card. These fees are waived for card members.