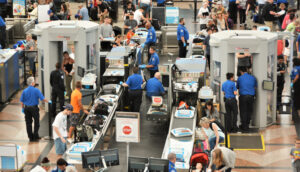 How to Breeze Through TSA Lines Like a Champ

Cooler weather means lower fares, and–holidays excluded—slightly shorter lines at TSA checks. Still, that’s no reason to get cocky. Waltz into JFK an hour before departure and you’re likely to miss your flight.

How to Avoid Long TSA Lines at the Airport

Even in the slower seasons, backed up TSA lines can be a source of major stress for flyers. But there are a few simple precautions you can take to help speed the process along, or at least offset the wait.

How early are we talking here? For domestic travel, two hours is a safe bet. For international flights, aim for three. If you think you can endure four hours at the airport, even better. Allow yourself that extra padding for potentially long TSA lines, or any other unforeseen issues, like an Uber driver taking a bad route on the way to the airport.

Some people (okay, most people) find airports to be dull and joyless voids. Fair enough! Compared to foreign airports like Singapore’s Changi, with its butterfly garden and free 24-hour cinema, U.S. airports definitely have some catching up to do in the entertainment department. That is unless you count browsing neck pillows as entertainment. However you choose to while away the hours before your flight, the important thing is that you’re early.

Before leaving for the airport, strategize as you pack your carry on. Consider what items you’ll need to retrieve quickly in order to pass through security and place those items up top or in easily accessible pouches. You don’t want to have to dig through a tangled wad of electrical cords to get to your laptop. By the same logic, you’ll also want to avoid wearing shoes that require excessive fumbling with buckles, straps, and laces. Can you get by without wearing a belt? One less thing to take off and on. By now, you know the drill, so remove keys and any loose change and place everything in your carry on before you get to the line.

Your liquids and gels are packed in a quart-sized bag, but do you know about recent TSA regulations on powders? Powdered makeup and food substances are now subject to additional screenings, so pack accordingly to avoid any snags at security.

Enroll in TSA PreCheck and CLEAR

Of course, not everyone has to take off their shoes. Flyers enrolled in TSA PreCheck can, in theory, breeze through security with shoes on, and liquids and electronics safely packed away. Still, the PreCheck line is a line and has been known to get backed up from time to time, but you’ll reach the gate much faster than without PreCheck. For $85 for a 5-year enrollment, it’s not a bad deal.

Then there’s CLEAR, which allows you to skip the ID check before the TSA’s main event. This isn’t an option everywhere, but it is available at larger U.S. airports including New York, Los Angeles, San Francisco, Atlanta, Chicago, and others. At $179 a year, CLEAR isn’t as cheap as PreCheck, but if you’re chronically late or just really hate lines, it could certainly speed things up.

The time of day you fly, and even the day of the week, can also factor into how quickly you reach the gate. The lines for morning flights can wind through airport corridors you never even knew existed, and weekend waits are often just as bad. Instead, try to book flights departing in the middle of a weekday when lines are at a minimum.

Before taking off for the airport, check the TSA wait times to get a sense of what you'll be up against.

If you do find yourself stuck in long security lines and genuinely fear you won't make your flight, don't be shy about approaching a TSA officer to request skipping ahead.