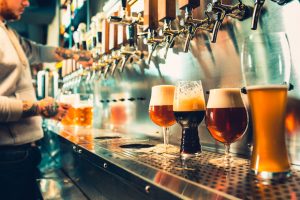 10 of the Best Beer Destinations in the United States

America’s craft beer obsession barrels on. If it feels like everyone and their brother is opening up a new brewery, it’s not far off.  According to the Brewers Association, by the end of 2017, there was a 16% increase in the number of operating breweries in the U.S., now totaling over 6,300. From global giants like Budweiser to your neighbor down the street, beer production in the States is at an all-time high.

Cities with Breweries and Taprooms Worth Traveling To

Nowadays at most bars, you'll find tap lists running longer than the Declaration of Independence, making it tough to sort out the wheat from the chaff Saisons. With every city claiming a distinct style, some destinations have made it part of their local culture. Below I’ve rounded up ten of the top journey worthy beer destinations in America that would satisfy the average imbiber to the fussiest beer snob.

Editor's Note: Taprooms may be closed or have limited hours due to the pandemic. Be sure to confirm opening times before visiting.

When you think of Boston beers, heavyweight Sam Adams first pops into mind, but beyond that behemoth, there’s a strong craft beer scene brewing in Beantown. With space at a premium in the colonial city, most breweries have pushed out into the suburbs to produce their suds. Harpoon, Trillium, and Sam still have smaller sized taprooms in the city worth visiting, but most production is done off-site nowadays.

Within a fifteen-minute ride outside of Boston, in neighboring burbs, you can find a burgeoning craft scene, with breweries like Night Shift, Mystic, Jack’s Abby, and Lord Hobo all producing a version of the en vogue hazy New England IPA. If you don’t feel like heading out of the city, bars like Bukowski Tavern, Deep Ellum, and Lord Hobo (the bar) will have a beer list to suit any beer snob. If you aren't fussy just drop into one of the many Irish bars dotted across the city for a pint, but please skip over touristy Cheers.

When it comes to beer destinations, San Diego could be the best in the West. California already tops the list with the most breweries in the nation and the nearly 150 producers in San Diego definitely boost those numbers. After the beach, San Diegans love their brews, particularly India Pale Ales.

Craft legends Stone Brewing and Ballast Point are probably the biggest to call the San Diego area home. With both outlets having tasting rooms and breweries spread throughout Southern California. Other scene-stealers are Green Flash (recently sold but will continue to produce it's trademarked West Coast IPA), Pizza Port with its offshoot Lost Abbey, and Fall Brewing Company. Alongside its nearly perfect weather, San Diego might also be the country's most ideal beer destination too.

Often overshadowed by its namesake on the West Coast, Portland, Maine puts out some craft beers to rival the Rose City. The little seaside city of 70,000 or odd people, is home to many of the top craft breweries on the East Coast. Belgian inspired Allagash has been putting out some of the better wheat beers for the last 20 years, and upstarts like Bissell Brothers and Foundation have recently gained a following beyond Vacationland.

Alongside its beer offerings, Portland’s food scene is arguably one of the best in New England. Restaurants like Eventide, Central Provisions, and Empire all serve local beer to pair with your obligatory lobster rolls and Casco Bay oysters. If you feel more at home in a dive bar like I do, the Commercial Street Pub always has some sort of ongoing beer promotion and is open 365 days a year. Just don't spill them on the pool table.

See all of our fares to Portland (PWM) from all over the U.S. and Canada.

Home to some of the countries oldest and biggest breweries like Miller, Pabst, and Schlitz, brewing beer in Milwaukee is an institution. So much so they’ve named their baseball team after it. There’s something timeless about the shape of the Champagne of Beer’s bottle, grabbing a High Life on a hot summer day by Lake Michigan.

While PBR and Schlitz have made a resurgence as the cheap tallboy cans at hipster bars across the country, Milwaukee has also been busy in the craft scene. Breweries like Lakefront, Milwaukee Brewing Company, and heavy-hitter Leinenkugel all produce popular German-style beers that are Sconnie approved.

See all of our fares to Milwaukee (MKE) from all over the U.S. and Canada.

Beer companies have been telling you to head for the mountains for decades now, and it's about time you listened. Beyond Coors, and its baseball field, visitors to Denver, will find one of the hottest craft beer scenes in the country. As the home of the Great American Beer Festival, Denver has been a mile-high summit for beer aficionados for nearly 25 years.

With brewpubs in every nook and cranny of the city, there’s no shortage of suds for you to try. Make sure to drop into Colorado Plus Brew Pub and the Falling Rock Tap House for epic tap lists that include local favorites from Great Divide, Odell, and Crooked Stave. If you've got time for a day trip, head up about an hour north to Fort Collins and tour its impressive brewery network which includes the celebrated New Belgium Brewery and Saison specialists Funkwerks.

In its quiet corner of western North Carolina, charming Asheville has been putting out top-notch brewskis for years. Its strong beer culture has drawn the attention of big boys Sierra Nevada and New Belgium who have recently set up shop for their East Coast operations.

Due to its small stature and saturation of brewers, Asheville boasts the most breweries per capita than any other city in America. Wicked Weed has been a stalwart in the area for nearly 20 years, but recently “sold out” to Anheuser-Busch InBev, much to the chagrin of many locals. W.W. still pumps out some of the better beer in the area alongside Green Man and Burial Beer Company who concoct creative brews like a Sweet Potato Porter and, Homer Simpson’s personal favorite, Donut Stout.

See all of our fares to Asheville (AVL) from all over the U.S. and Canada.

The Pacific-Northwest prides itself in the beer it pumps out, and Portland is the epicenter. While there are thriving scenes in nearby Bend and its neighbor to the north, Washington. Portland proper houses about 75 breweries in its perimeter, making it the city with the most microbreweries in the world.

With such a large selection and newcomers popping up on the regular, it’s tough to narrow down where to share a tipple. You can’t go wrong dropping into Cascade Brewing Barrel House to try some of the best sour beers in the area. If you find yourself in downtown, Bailey’s Taproom has a rotating draft list that focuses heavily on native Oregon offerings. No matter where you ramble around this beer mecca you’ll have no problems finding a place to pull a pint.

While San Diego gets a lot of attention, NorCal natives will tell you they produce the best beer in the Golden State. In this wine heavy region, beer doesn’t take a back seat, as some of the best hop heavy brews come out of breweries like Russian River and Bear Republic.

Pliny the Elder by Russian River is often considered the best beer in America but was recently dethroned after eight years on top. Lagunitas Brewery is down the road in Petaluma, and while they sold a large stake to Heineken, they still produce a suitable IPA for any occasion. HenHouse also just hatched a taproom in Petaluma as a secondary outpost from their home base Santa Rosa where at both locations you can try their tasty Oyster Stout or Saisons.

See all of our fares to Santa Rosa (STS) from all over the U.S. and Canada.

Growing up in New England, I knew Stowe mainly for its ski trails, not its pale ales. This little hamlet outside of Burlington has been a hotspot for beer connoisseurs over the last few years primarily due to The Alchemist brewery.  Alchemist’s Heady Topper went from cult favorite to one of America’s most desired craft beers, almost overnight. Sending beer nerds from far and wide on hour-plus rides to the Green Mountain State to secure a four-pack of the limited libation.

While Alchemist, is still the name and foam on everyone’s lips; other Stowe breweries are fostering a little Bavarian flavor in the area. Idletyme is known for its German-style brews, and von Trapp churns out Austrian inspired lagers in their respective biergartens. Sleepy Stowe isn't for everyone. Burlington is an excellent hub for venturing to Vermont's other small breweries. Belly up to the bar at Nectar's with a plate of gravy fries and a local pint while the Dead cover band keeps Truckin’.

See all of our fares to Burlington (BTV) from all over the U.S. and Canada.

So-called Beer City, USA, Grand Rapids has gone toe-to-toe with the larger markets in the nation when it comes to producing quality grog. Founders Brewing Co. is the city’s shining example of how to brew award-winning beer for the masses, as they take their operation international after an investment from beer giant Mahou-San Miguel. The somewhat recent investment knocks them out of the status of craft-brewery, but Grand Rapids has heaps of other upstarts to fill that classification.

HopCat’s numerous punny cat names for its beer rival its number of brewpubs in the area. Aptly named Grand Rapids Brewing Company serves up quality pub grub alongside its array of tap offerings. For a heavenly experience, Brewery Vivant is housed in a former chapel where its farmhouse and Belgian inspired beers will leave you saying "Amen."

See all of our fares to Grand Rapids (GRR) from all over the U.S. and Canada.

Header image by Master1305 via Shutterstock.com

All other images courtesy of TripAdvisor.com