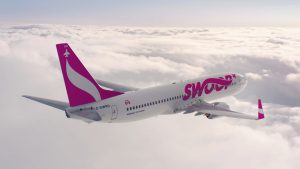 Swoop began two routes yesterday, two more start early next week, and the remaining two begin later in the summer. Although initially a rather small network, Swoop has filed a request with regulators to begin service to the USA in October. The airline intends to fly from Canada to Las Vegas, Orlando, Tampa, Fort Lauderdale, and Phoenix. We will keep you posted when these routes become available for sale.

As for this sale, fares are advertised for travel between September 5 and October 27, but we're seeing the lowest fares available outside those dates on a few routes. Click on the fare details below for more info.

All fares are nonstop and work in the reverse direction as well. Fares are displayed in USD on our linked pages.

As with other ultra-low-cost-carriers, the base fare will only include transportation for you and a small personal item such as a small backpack, briefcase, or large purse that will fit underneath the seat in front of you.

Above image via Swoop.