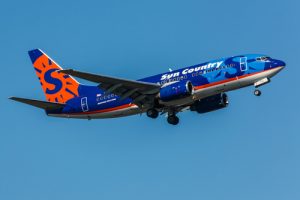 This is the latest move by Sun Country to expand its network since transitioning into more of a no frills airline. Previously announced new service to Hawaii will begin this weekend and five other new routes commence in June. The new routes are all operated on limited days each week.

Fares on the new routes are valid from start date through October. There is no advertised expiration date so prices may jump at any time. Make sure to click on the fare details for specific information as these routes are only operated 2-4 times per week.

All domestic fares work in the reverse direction as well. Sun Country's Grab & Go fares only include one small personal item (small backpack, large purse, etc.) that will fit underneath your seat. Checked bag fees start at $20-$25 each way. Larger carry-on bag fees start at $25-$30 each way.

Prices listed were found on SunCountry.com and have been updated as of Monday, May 21. Fares are subject to change at any time.