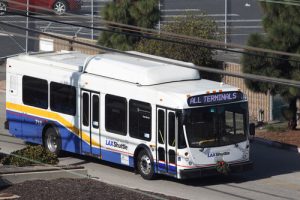 How to Get to/from Los Angeles (LAX) Airport

If you’ve ever flown out of LAX, you’ll be familiar with the nearly 24-hour gridlock traffic surrounding the airport. The central terminal area seems to always be a sea of brake lights with no end in sight. The LAX people mover promises to ease this congestion, but the project will not be completed until 2023 at the earliest.

The Los Angeles metropolitan area covers 4,850 square miles, according to the U.S. Census Bureau, and the Los Angeles-Long Beach-Riverside combined statistical area sprawls across five counties covering 33,954 square miles. That’s a lot of ground to cover for one region.

Although there are many airports throughout this region, most of them don’t have much of an international network. Due to many competing airlines and the number of flights, LAX often has the lowest fares or the most seats available at the lowest prices in the area. Depending on where you are coming from or going to, it can be daunting traveling to/from LAX, but there are plenty of ground transportation options that can make this journey less stressful.

Technically, the cheapest option is to either walk or ride a bike, but most travelers won’t be interested in those options with luggage in tow. If you do wish to cycle to LAX, it’s best to leave your bike at the Aviation metro station where there are racks and lockers available. From there, you can hop on the free shuttle bus to all terminals. If you're on a motorcycle, you can park for free in designated areas at each parking structure right next to the terminals.

If you’re arriving on a flight at LAX and want to take the metro bus/rail, look for signs to Ground Transportation. Once outside the terminal, look for the PINK LAX Shuttle sign on the Lower/Arrivals Level in front of each terminal. The free “G” shuttle bus stops at all terminals on its way to the Aviation Station on the green line of the LA Metro rail.

From the Aviation/LAX metro station, you can continue to many different areas by bus or rail depending on your final destination. If you’re trying to get downtown, take the green line rail east towards Norwalk station. Get off the green line after six stops at Willowbrook/Rosa Parks Station and transfer to the metro blue line rail north towards 7th St./Metro Center Station.

Alternatively, you can get off the green line a couple stops earlier at Harbor Fwy Station and transfer to the silver line bus metro 910/950 heading north towards El Monte Station via Downtown. The silver line bus travels on the 110 freeway, offering “express” service to Downtown L.A., but additional charges may apply. And since you’re subject to traffic on the 110, it may not be quicker. If you’re going elsewhere in the metro area, you can plan your route here.

Regular metro fares are $1.75. Seniors pay only 35¢-75¢ depending on time/day and K-12 students pay just $1. Certain transfers may require additional charges. You’ll have to buy a $1 TAP card from the vending machine at Aviation/LAX station in order to travel on the metro rail. You can keep this card to load stored value for your trip or add unlimited ride passes. A 1-day pass costs $7; a 1-week pass costs $25, and a 1-month pass is $100.

There are other municipal bus lines serving LAX airport such as Culver City Bus Lines, Santa Monica Big Blue Bus, and Torrance Transit. These lines and other metro bus lines pick-up/drop-off at the LAX City Bus Center. You can find a free Lot South / LAX City Bus Center shuttle bus from the terminals by waiting under the LAX Shuttle & Airline Connections sign on the Lower/Arrivals Level. This bus service does not operate from 2am-4am. For a look at other metro bus services, take a look at all LA Metro airport routes.

For travel from town to the airport, just follow these directions in reverse order.

The FlyAway bus is available between LAX and Hollywood, Long Beach, Union Station, and Van Nuys. This is a direct bus to/from these locations so it can be a cheap alternative to a taxi.

On the arrivals level of LAX, look for the blue signage labeled “LAX Flyaway”. Schedules will vary by route, but most routes run hourly from around 5am until 11pm. Trips between Van Nuys and LAX are operated around the clock and run every half hour. Check out the full schedule for each route here. Note: Hollywood and Long Beach routes are currently suspended. Only Union Station and Van Nuys Fly Away Busses are running at this time (April 2020).

You can buy your ticket in advance online or just pay the driver with a credit card. Cash is not accepted. There is no reservation required. Seats are available on a first-come, first-served basis.

If you have a local transit TAP card or EZ Transit Pass, you can get a slight discount on the Flyaway bus, making this the best value to/from LAX.

Fast and Affordable – Uber or Lyft

If you don’t have Uber or Lyft yet, download these apps before your next trip to LA. Both ride-sharing services offer reasonable rates to/from LAX compared to taxi service and the apps will also be useful to get around town during your trip.

Both companies offer multiple different comfort-level options, but you'll have to pony up for the premium service if you want curbside pickup from the terminal area. Only Uber Black, Black SUV, or Lux, and Lyft Lux Black or Lux Black XL are allowed to do curbside pick-ups. For cheaper options, you'll need to make your way to the LAX-it area to find your ride.

The standard personal vehicle service for uber is called uberX and the standard service for Lyft is just simply Lyft. There are also a few other options if you need a larger vehicle. Once you've arrived at the LAX-it lot, follow the in-app instructions to locate your driver.

There is also another ride-share company operating at LAX. Opoli claims to never have surge pricing and offers a wide variety of vehicle options — including a Tesla or limousine service. Prices seem to be a bit higher than normal Uber or Lyft prices, but you can always compare to find the best option for you. You'll find Opoli service at the LAX-it lot.

Pro Tip: If you notice Uber or Lyft seem abnormally high from LAX due to surge pricing, you can follow the instructions above to take the free “G” shuttle bus to the Aviation/LAX metro station and request your ride from there. The free bus will likely take you out of the surge zone and you can sometimes save 50-75% off your ride service from LAX. As an added bonus, you may be able to use a shared-ride option (uberPool or Lyft Line) once you are off the airport property to save even more.

If you’re looking for the quickest and easiest way out of LAX, you can follow signs to the taxi ranks located on the arrivals level in three different locations; the LAX-it lot next to Terminal 1, inside parking structure 3 between the Tom Bradley International Terminal and Terminal 3, or at the far end of Terminal 7. For handicapped pick-ups, call the taxi dispatch at 310-636-9177 and a taxi will be dispatched to the nearest ACCESS location.

There is a flat rate of $46.50 (plus tip) to/from Downtown LA. If you’re going to the Hollywood area, expect to pay between $50-$60. Travel to other areas will vary in cost. You can calculate an estimated taxi fare here. Travel time can vary quite a bit depending on traffic, but expect it to take around an hour to get most places.

There are also several long-distance regional busses offering service to/from LAX. These can be a much more convenient option than having friends or family making a long drive to LAX in order to pick you up.

You’ll find these regional busses under the orange "Shared Ride Vans and Charter Buses” sings at each terminal.

There are also a few shared-ride van services, which will bring you door-to-door between LAX airport and your home or hotel. These can take a long time depending on where you are on the list of drop-offs or pick-ups, but they do provide the convenience of bringing you door-to-door for cheaper than a taxi. Look for these vans under the orange "Shared Ride Vans and Charter Buses" signs at each terminal.

SuperShuttle is the most popular shared-ride service. You can book these in advance or upon arrival at the airport. A few other shared ride services include Prime Time Shuttle and Karmel Shuttle.

As you can see, there are plenty of options to get to/from LAX airport. I gave directions on how to pick up these services from LAX, but you can follow the reverse direction in order to get to LAX. Whatever method you use, since there is currently no train service directly to the terminals, expect to sit in a lot of traffic within LAX airport. This means many of the scheduled services may be delayed, so be patient when taking transport from LAX.