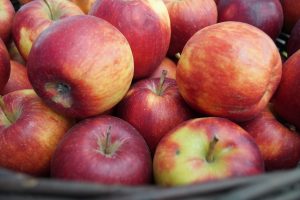 As travelers, we all make the occasional misstep, be it the forgotten tube of toothpaste tucked in our carry-on or a Swiss Army knife accidentally left at the bottom of our backpack.

When that happens, the TSA can confiscate these items and there’s really no major penalty aside from the slight annoyance of losing your stuff. In other cases, a moment of forgetfulness can end up costing you quite a lot, as one Colorado woman recently discovered upon her return to the U.S.

Crystal Tadlock was headed home on Delta flight from Paris when she was given an apple by a flight attendant. Thinking she’d save the apple for later, she placed it in her carry-on and forgot about it entirely.

That would have been the end of the story, except that on arrival in the U.S., Tadlock was selected at random to be searched and the apple was discovered by a customs agent.

“He asked me if my trip to France was expensive. I said “Yeah.’ I didn’t really get why he was asking that question. And then he said it’s about to get a lot more expensive after I charge you $500,” Tadlock told Denver’s Fox31.

Though the apple was clearly marked with a Delta logo sticker, indicating that it had been provided inflight, that wasn’t enough to sway U.S. Customs.

“We encourage our customers to follow U.S. Customs and Border Protection protocols,” a Delta spokesperson said.

So, what exactly are the protocols? In an effort to keep out foreign pests and animal diseases, U.S. Customs and Border Protection requires that fresh fruits, vegetables, plants, seeds, soil, and meat (any plant or animal materials, if you’re unsure)  must be declared and is subject to inspection by a CBP agent, according to the cbp.gov. Undeclared prohibited agriculture items will be confiscated and can result in the issuance of a civil penalty to the traveler for failure to declare the prohibited item. Global Entry passengers also risk having their membership revoked if caught violating the rules.

While a $500 fine for a single apple may seem awfully aggressive, these types of agricultural restrictions are fairly common and even extend sometimes to domestic travel. Hawaii notoriously prohibits passengers from bringing in outside pineapples, along with other fruits, root vegetables, and seeds.

Travelers should also be wary of packing food from the U.S. on international flights. As a general rule, processed foods are fine, but fruits, vegetables, and meats are not.

As for Tadlock, she plans to contest the $500 apple fine in court.