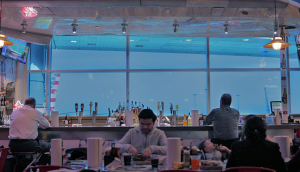 Of all the crazy wackadoodle things that a person can encounter while wandering through a Las Vegas casino, there are two things you can bet on not seeing: clocks and sunlight.

That’s because Las Vegas has long known that people tend to stay later and spend more without them. And now it seems that airports are finally catching on to this strategy, or at least part of it.

In an attempt to lower temperatures in the gate area, Dallas-Forth Worth began experimenting last fall with tinted “smart glass” windows. Similar to transition sunglasses, the glass opacity can be adjusted to allow in more or less sunlight.

According to a study released by dynamic glass manufacturer, View, Dallas-Forth Worth passengers waiting by dimmed smart windows remained seated at the gate 83% longer than those waiting in full sun, where temperatures were much hotter.

Lowered sunlight also affected alcohol sales at a gate adjacent burger bar, which increased by a whopping 80%. In fact, all nearby retail outlets reported a boost in sales after the switch to smart glass windows.

The uptick in food and beverage sales could mean big business for airports across the U.S. who, as Bloomberg reports, have been suffering from lost parking revenues in recent years as more people turn to Uber and Lyft.