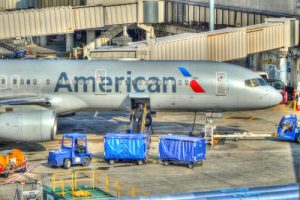 At the beginning of March, American Airlines, along with partners British Airways, Iberia, and Finnair, announced that they would be bringing basic economy fares to transatlantic flights between between North America and Europe. These fares will differ slightly from basic economy fares within the Americas. They will include a normal carry-on allowance, but basic economy fares to/from Europe will not include any checked bags for free.

Earlier this week, Delta became the first major US airline to charge a fee for first checked bag on transatlantic flights. As usual when Delta starts a new policy, the other major airlines follow. Last month's press release from American stated that basic economy fares to Europe would be introduced in April. I don't see any basic economy fares on European routes at this time, but testing could be underway already and it will likely be rolled out across their network eventually.

American Airlines' transatlantic basic economy fare will come with a $60 fee each way for first checked bag. For a fee, you'll be able to choose your seat at booking and you'll have the ability to make changes, but the basic economy fare will not be eligible for upgrades. Elite status members may have less restrictions, but AAdvantage credit card holders will still be subject to checked bag fees to/from Europe.

Their main cabin (regular economy) fare will still include one free checked bag and standard seat selection, so if you want to stick with their classic experience, you'll still be able to buy main cabin fares. If history is any indication though, the low fares you're used to seeing will become basic economy fares and the main cabin fares will rise.

For now, I'm still only seeing main cabin fares for sale on transatlantic flights. Since there isn't an exact date given by American for when the new transatlantic basic economy fares will be rolled out, it could be your last chance to buy low fares to Europe on American (or Oneworld partners) that include a checked bag.

Below are some good main cabin fares I found today (April 13, 2018) that still include one free checked bag. Travel days and time periods vary by route. Book these while you still can!

So far, no announcement from United on basic economy fares to Europe, but I'm guessing that is not too far away.

Above image by QualityHD via Shutterstock.