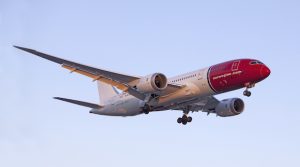 Are We Nearing the End of Super Cheap Fares to Europe?

Fares between the U.S. and Europe have never been cheaper than in recent years, and that has everything to do with increased competition. The rapid expansion of low cost carriers like Norwegian and WOW has left legacy carriers scrambling to keep up, with many now offering pared down tickets of their own.

But are we nearing the end of cut-rate tickets to Europe? It seems entirely possible as news comes this week that International Airlines Group, which owns both British Airways and Iberia, has purchased a 4.61% equity stake in Norwegian.

“The minority investment is intended to establish a position from which to initiate discussions with Norwegian, including the possibility of a full offer for Norwegian,” AIG said in a statement.

A full takeover would be a boon to IAG who would then inherit Norwegian’s very young and fuel-efficient fleet.

You might also recall Norwegian’s recent toe-dip into the South American market with service from London to Buenos Aires. IAG surely views that- along with Norwegian’s stated plans to expand in Brazil, Chile, and Uruguay- as a threat to Iberia’s existing hold on these routes.

Decreased competition is never good news for consumers, but Norwegian is far from the only low cost game in town these days. WOW Air currently serves more U.S. cities than Norwegian, Primera Air is expanding fairly quickly, and Eurowings is picking up many of the routes deserted by Air Berlin.