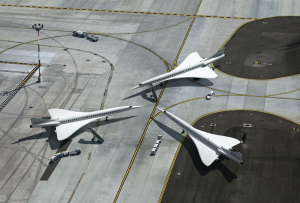 Is a Supersonic Flight in Your Future?

You may have seen recent news about a big contract NASA gave Lockheed-Martin to develop a "quiet supersonic aircraft." And you may also have seen plans for a startup company, Boom, to build a working supersonic transport (SST). And several other companies and groups are working on supersonic business jet designs, although I'm not aware that any have actually decided to build a demonstrator, let alone an actual prototype. So don't plan on flying supersonic on your next trip. Unfortunately, much of the recent reporting on SST travel has been a bit misleading. Here, to the best of my knowledge, are some relevant facts.

1. You won't be flying on either transport planes any time soon. Both the Lockheed-Martin and the Boom efforts are currently focused on small-scale "validate the concept" planes, not actual prototypes. Both will fly around 2020-2021, but neither will come even close to being a useful transport. Figure up to eight to ten years after that.

2. Much of what has been written about the sonic boom problem is misleading. Talk of "breaking the sound barrier" implies that the boom occurs only when a plane transitions from subsonic to supersonic, and that just isn't the case. Supersonic cruise flights create a continuous boom over the surface below the plane as long as the plane flies over Mach 1. That's why the "no supersonic flight over populated areas" rules exist.

3. The Lockheed-Martin concept is a low-boom, Mach 1.4 (about 1190 miles per hour) plane that could be quiet enough to operate over land. It could fly Los Angeles-New York in something like three hours, or New York-London in four-plus hours or so. If the design actually achieves an acceptable boom level, it would enjoy a large market. Nobody is talking about possible fare levels.

4. The Boom concept is to ignore the boom and build a small, 40- to 50-passenger Mach 2.2 plane that creates a substantial boom and will therefore be limited to overwater routes. It could do New York-London in something less than the Concorde's 3½ hours and maybe go as far as Seattle-Tokyo. Boom is targeting fares comparable to today's business class fares.

5. Concorde flights were not terminated because they were unprofitable. Granted, the manufacturing program was highly unprofitable, but once the planes got built, British Airways' Concorde flights were extremely profitable; Air France flights less so but still not disastrous. Safety issues didn't ground the planes, either; after some post-crash modifications, the airframes were good for another 20 years. Instead, the Concorde was actually grounded because Airbus decided it would no longer provide technical support.

6. The answer to the title question is, "Yes, if you're young enough and rich enough." It will happen—maybe in eight to 10 years. And my personal guess is that the first new supersonic passenger-carrying jet will be a business jet fully or partially built in Russia.

7. Is supersonic travel worth it? Hard to say. I flew the Concorde twice—on insanely low fares I was able to wangle, not freebies—and flying from New York to Paris in four hours, with a sumptuous lunch served most of the way, was a fantastic experience. But would I have paid full fare? Not likely.