Denver based Frontier Airlines is adding 3 new cities to its route map. Harrisburg, which had previously been served to/from Orlando, and two brand new cities, Syracuse, and Portland, Maine. New service between these cities and Denver, Orlando, Raleigh, and Chicago (Syracuse only) will commence in July or August depending on the route. Intro fares start at just $57 round-trip.

Frontier has made a strong push to add new routes in underserved markets. They are well known for entering and exiting these markets quickly if flights do not sell very well. The approach seems to be start flying a route and hope the population embraces a service they never thought they needed. With super low fares to/from cities that don't have any other ultra-low-cost-carriers to choose from, these flights can seem enticing. Just know the product that Frontier offers is different and they will operate a very limited schedule.

Intro fares are either valid from service start date through mid-November, or in some cases, the lowest fares begin in September, with slightly higher fares available for summer travel. All of these routes are flown only 2-3 times/week and have different start dates so you'll have to click on the fare details link below to find out specific dates these fares are available.

These are especially great fares for summer travel so do book quickly if you want to travel on these routes this summer. Tickets must be booked by April 6.

These fares all work in reverse as well. Keep in mind that Frontier charges extra for any bags larger than a personal item (small backpack, briefcase, large purse, etc.). Pack super light to get the lowest price. Checked bag fees start at $25 each way. Larger carry-on bag fees start at $30 each way.

Frontier has also extended the rest of their flight schedule through November 14, for Discount Den members only. This is one perk Frontier gives its members in order to entice them to join. Since they have regular promo code sales, I don't find the membership worth it unless you plan on flying Frontier on a regular basis. 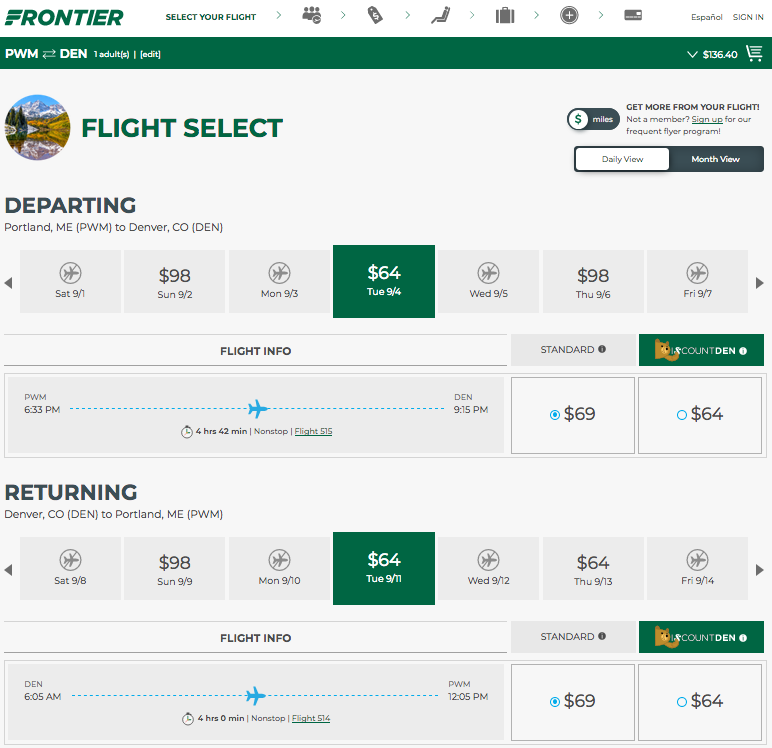